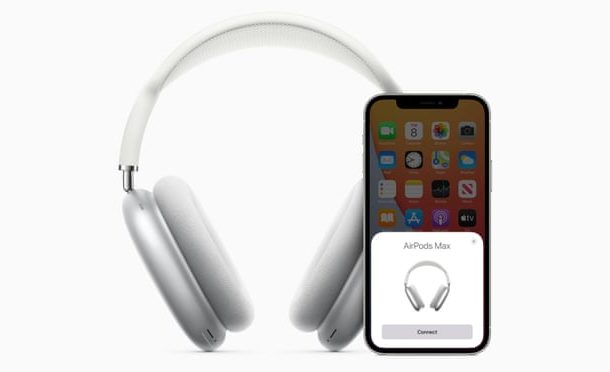 The new headphones look to take the good bits of Apple’s wireless earbuds, AirPods, and put them in larger Bluetooth headphones with high quality speakers and a very high price tag.

AirPods Max feature active noise-cancelling, Apple’s spatial audio technology that simulates surround sound and a transparency mode similar to that of its AirPods Pro. But they also feature a “breakthrough listening experience with Adaptive EQ” according to the firm.

The headphones have a similar computational audio processing system to the firm’s HomePod smart speaker, which tunes the music in real time, adapting to the shape of the wearers’ face, hair and glasses and promising to produce consistently rich and detailed audio.

They have a fairly traditional shape with a mesh headband and fabric ear pads that are attached to the aluminium cups via magnets for easy replacement. The top of the right ear cup has a button for activating noise-cancelling as well as a digital crown jog-dial, similar to that on the Apple Watch, for controlling volume and playback.

They last up to 20 hours between charges and take two hours to fully recharge via a Lightning cable, although like the firm’s recent iPhones, a USB power adaptor is not included. A standard headphones cable is also an optional £35 extra.

The unveiling provoked surprise from users and industry watchers alike, primarily for the price, which is nearly double the majority of competitors and

— (@SurgeCudi) " data-link-name="in body link">greater than Sony’s PlayStation 5. Although analysts were more favourable, describing the high price as an attraction for those looking for a status symbol similar to the premium editions of Apple Watch or traditional Swiss watch brands such as Rolex.

The design of the smart fabric case into which the headphones slot, putting them into a low-power standby mode for storage and travel, also attracted attention for different reasons, being compared to a handbag or a bra for the headphones.

AirPods Max will be available in UK on 15 December and require an Apple device running iOS 14.3, iPadOS 14.3 or MacOS 11 Big Sur or later.

Apple faces fierce competition in the headphones space, not only from market-leading rivals such as Bose, Sony and B&W that produce similar headphones costing about £300, but also from its own Beats brand, which sells a range of noise-cancelling headphones.