Are you ready to break up with your phone? 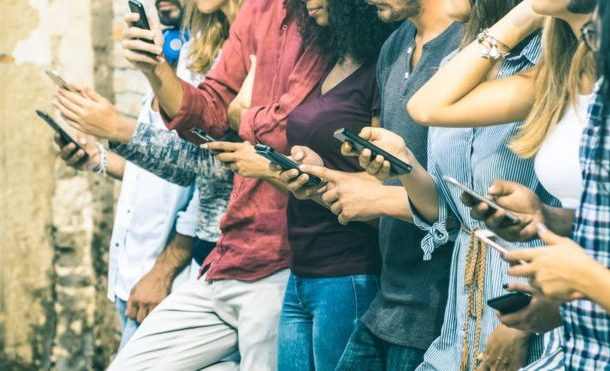 There is a growing sense of unease among many smartphone owners about the amount of time we’re spending on our devices.

Google told me that around 70% of the Android users it spoke to wanted to “find a better balance” in their tech use.

But this puts the tech sector in an awkward spot. How can it help its customers detach from their phones when, for many firms, their business model relies on them doing the opposite?

Both Apple and Google have this year released digital tools – called Screen Time and Digital Wellbeing respectively – which let iPhone and Android users see how much time they are spending on various apps and how often they pick up their devices.

Many Android users will not have it yet as it is part of the Android Pie operating system, which has only been released by a handful of phone brands so far.

For those who have seen it, the results can come as a bit of a shock.

On my first day with Android’s Digital Wellbeing tracker, I unlocked my phone 200 times and spent more than three hours on it.

This was alongside working a long shift in the BBC newsroom and being a mum. I’m sure it wasn’t all WhatsApp banter and Cats of Instagram but I was still horrified, to put it politely.

Rose La Prairie is a London-based Google engineer who was on the team which developed the tool.

She told me that the tech giant was well aware people might feel “guilt or shame” when confronted with the data for the first time, so designing the interface to be non-judgemental was crucial.

“Part of it was making sure we didn’t do things like big red arrows or big green arrows, or trying to make a judgement, or an assessment, of what is good or bad,” she said.

“When it comes down to it, when we talk to people, it very much depends on the individual, so what’s good for me might not be good for someone else.”

Ms La Prairie thinks that most people should be able to self-regulate by using the product.

“For some people seeing the data will be enough, it’s that reminder of how you spend your time and what you do on your phone.” she said.

“There will be some people who will need a little extra reminder, and I put myself in that camp.”

For those people, the dashboard can be set to mute notifications, make the phone display go black and white at a certain time (such as bedtime) and set an alert after a certain amount of screen time on an app.

But it is not really in Google’s interests for you to not be on your phone, is it?

Unlike Apple’s hardware-focused business model, Google is advertising-driven and that very much requires eyeballs on screens.

“I think what we really care about is making sure users have a good experience,” Ms La Prairie says.

“People want to figure out how they use their devices in a different way and we really want to make sure we can help users with that.”

It’s worth noting that what she doesn’t say is: “Turn the phone off.”

Devices like the Nokia phone from HMD Global and the tiny Palm phone are marketed as companion devices – in Nokia’s case with less functionality, in Palm’s case just smaller – to give us a break from our main device.

“It is a little bit ironic that they are trying to sell you a little phone to do the same thing [as your big phone].”

Ultimately, Mr Wood believes it really comes down to willpower.

“You can have all the different type of gadgets but it’s down to you as an individual how much you want to spend time on your phone,” he said.

“I realised I didn’t want that to be her impression of a human relationship, but I also didn’t want it to be the way that I was living my own life,” she said.

“Breaking up with your phone does not mean dumping your phone or throwing it under a bus, it just means taking a step back to create a relationship that is actually good for you. It’s becoming friends with your phone.”

In her book, Ms Price lists a 30-day plan to reclaim this “friendship”. Her top tips include:

As for me – well I’ve got over the shock of seeing how often I reach for my phone. But have I changed?

I still find myself on my device, having picked it up to, say, check the weather forecast, only to suddenly find myself on social media 10 minutes later, still with no idea about whether or not I need an umbrella.

That said, I do genuinely use my handset a lot for work, to navigate my way around, and to keep up with the endless communications from my children’s school. I tell Ms La Prairie I’d like to be able to differentiate between time well-spent on my smartphone and time wasted.

Apparently I’m not the only one.

“The way we think about use is intentional and unintentional, and people really care about the unintentional because it makes you feel guilty,” she tells me.

“A great version would be how to we crack that nut, and distinguish between intentional and unintentional.”

So is 2019 going to be the year we break up with our phones? Analyst Mr Wood isn’t convinced.

“For me, 2019 is the year when people are going to be more aware of the amount of time they are spending on their phones,” he said.

“But breaking up with their phones? That’s a very big ask.”