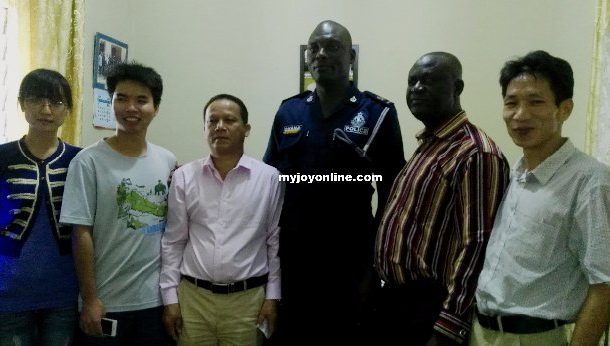 Police at Dunkwaw Offin in the Central Region have arrested a member of a 4-member robbery gang that shot a 29-year-old Chinese national at Nyinawusu.

Zhan Jin Hu died instantly when the gun-wielding gang attacked the mining site Monday. He was working on a broken down excavator with Guan Zhin, another Chinese when the attack occurred.

Police say the mask-wearing robbers shot the deceased without any provocation and bolted with an unspecified quantity of black ore containing gold.

According to him, efforts to fight the menace has been difficult because some of the robbers cross the Offin River in canoes.

“Attacks on the miners occur periodically, it is not a one day issue. But it’s been a difficult situation which the police is managing. Sometimes they come across the river from the Ashanti Region attack and then go back. It makes it difficult for the police,” he said.

That notwithstanding, police has been ruthless in dealing with the issue as several of the criminals are arrested and prosecuted.

“We patrol the areas and in most cases, we’ve been able to arrest some of them who are not languishing in jail,” Supt. Dzanzi revealed.

Police have arrested a 23-year-old Ernest Boakye, identified as a member of the gang.

Boakye and his accomplice, Emmanuel Addai had gone to the mining site to rob again, a day after Mr Zhan was killed. But their attempt to snatch a motorbike from its owner failed after the young man raised an alarm.

Unluckily for them, Addai got lynched by residents of Nyinawusu until the assemblyman for the area rescued Boakye.

Meanwhile, police have handed over the body of the late Zhan Jin to the Chinese Community after an autopsy.

A delegation from the Guangxi Chamber of Commerce and the Guangxi Association of Ghana have been visiting Dunkwaw and Nyinawusu to mourn with the family of the deceased and also to show appreciation to police and residents for their support to the Chinese community during its difficult moments.

They presented cash and food items.