Arsenal fight back to beat Tottenharm in firy derby 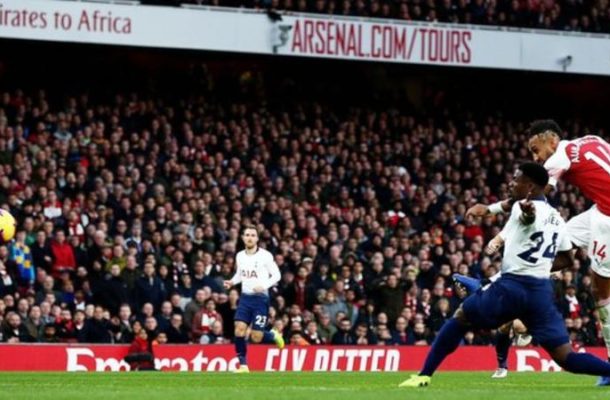 Arsenal produced a relentless attacking performance to overpower Tottenham and deservedly win a pulsating north London derby at Emirates Stadium.
Unai Emery's side extended their unbeaten run to 19 matches ,moving above Spurs into the top four, with a display that reflected the outstanding work the Spaniard has done since succeeding Arsene Wenger.

Arsenal's fast start drew early reward when Pierre-Emerick Aubameyang put them ahead from the spot after Jan Vertonghen's handball.

Yet Spurs, against the run of play, were ahead before the break. Eric Dier glanced home Christian Eriksen's free-kick to equalise, sparking a melee involving players from both sides with his celebrations in front of Arsenal's fans, before Harry Kane scored from the spot after Rob Holding was penalised for a challenge on Son Heung-min.

Emery introduced Alexandre Lacazette and Aaron Ramsey at the start of the second half to dramatic effect.

The Welshman set up Aubameyang's magnificent finish and the France striker's deflected shot beat goalkeeper Hugo Lloris from the edge of the area to put Arsenal ahead with 16 minutes left.

The outstanding Lucas Torreira ran clear to wrap up Arsenal's win and Spurs' misery was complete when Vertonghen was sent off for a foul on Lacazette.