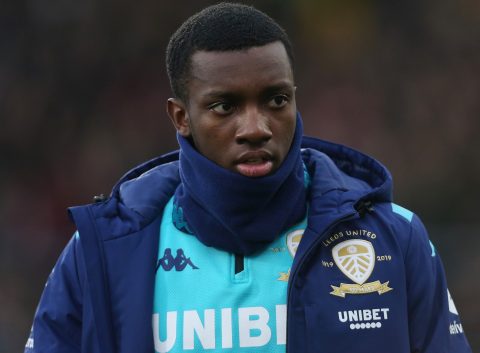 Ghanaian Younger Edward Nketsia could be on his way back to Arsenal as the January transfer window opens.

Arsenal are set to recall Eddie Nketiah as the striker seemed to wave goodbye to Leeds fans during their 5-4 thriller against Birmingham.

The young forward was loaned out to Marcelo Bielsa’s Whites this summer but so far the 20-year-old has played just 15 times in the league - all off the bench.

Yet he has still recorded a goal every 107 minutes and Arsenal want the striker to receive more regular game time elsewhere.

According to Football.london, Bristol City and German side Fortuna Dusseldorf are pursuing the starlet, with the final decision on his immediate future to be confirmed in the coming days.

It is claimed managing director Vinai Venkatesham and head of football operations Huss Fahmy met with Nketiah in October and the lack of gametime was discussed.

"Obviously I'm never going to be totally happy if I'm not playing because I'm proud player, I believe I should be playing and I always want to be playing so I'll never be happy with not playing."

Nketiah did not feature in Leeds’ 5-4 win at Birmingham, but at the end of the game he went over to the travelling fans and made a waving gesture.

Whites supporters are sure this was the striker saying his goodbyes.

It does look like that’s a ‘goodbye’ wave from Nketiah though. He will absolutely need to be replaced and Bielsa will need to learn from last years’ mistakes. Although it has to be noted we scored 5 without Bamford.

— Scott Eaglen (@ScottEaglen) December 29, 2019
Anyone else think that was Nketiah’s last game? Seemed to give the fans a goodbye wave. Didn’t really seem as interested as I thought he would be. Played well, but didn’t look the player he did at the start of the season.