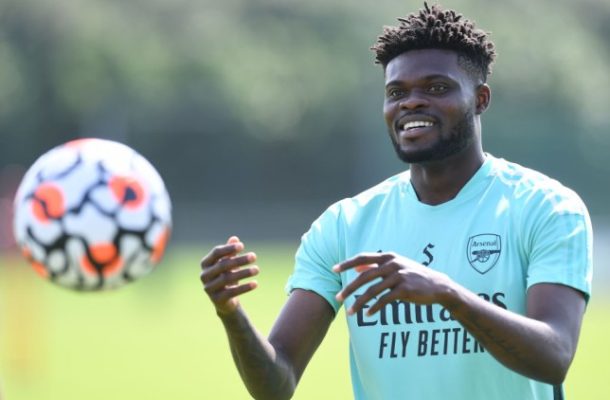 Arsenal midfielder Thomas Partey is now fit and ready to play for his side in Saturday's crunch fixture against Liverpool on Saturday.

Partey missed Arsenal’s 1-0 win over Watford on November 7 with a tight groin and subsequently pulled out of the Ghana's World Cup qualifiers against South Africa and Ethiopia.

The 28-year-old has spent the last two weeks working on his fitness at the Gunners’ London Colney training base in a bid to be fit for the match at Anfield.

And it seems that the hard work has paid off, with Granit Xhaka and Sead Kolasinac the only two players featuring on an injury list published on the club’s website on Thursday.

The update went on to say: ‘All other players in the men’s first-team squad are currently fit and available for selection.’

The news will be a huge boost for Arsenal boss Mikel Arteta, who was forced to play Ainsley Maitland-Niles and Albert Sambi Lokonga in midfield against the Hornets, with Granit Xhaka also sidelined with a serious knee injury.

While Xhaka remains out for now, the club issued a positive update on the Switzerland international’s recovery.

‘Granit is continuing to make good progress in his recovery from a medial knee ligament injury sustained on September 26. Granit is now running outside with the current aim to be back in full training in January,’ they said.

However, the news is not so good for left-back Kolasinac, with Arsenal confirming that he had sustained ‘a significant injury to his left ankle playing for Bosnia and Herzegovina during the international period’, adding that he was ‘back in the UK and continues to be assessed.’

Arsenal go into the game against Liverpool on the back of a ten-match unbeaten run in all competitions and could leapfrog their opponents into the top four with a win.