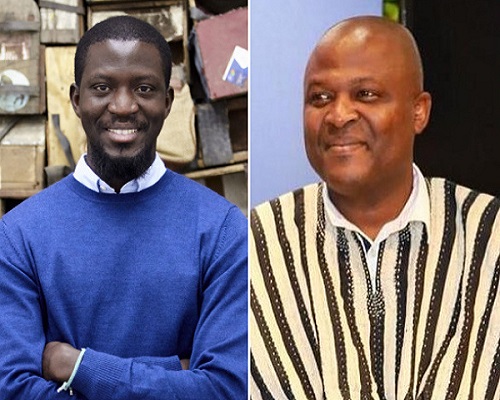 Sometimes one cannot hold but to be appreciative and that is the exact picture an internationally recognized artist has painted here. A little appreciation here and that makes the world a better place.

How nice it sounds when two who bear same name adore each other. Here, we have an Ibrahim Mahama adoring another Ibrahim Ibrahim.

According to artist Ibrahim Mahama, one of Ghana’s youngest millionaires, Ibrahim Mahama the engineer “is one of the generous people I have ever met”.

According to the artist of monumental installations, there had been lots of times people had mistaken him to be the engineer Mahama who is more popular but confessed he had a wonderful feel about the latter when they first met.

He is heard to have said “Interestingly enough, for the first time, we met and it was interesting. I think that he’s one of the most generous people I have ever met and we had such beautiful conversations. I think the problem is that because he’s known to be Ibrahim Mahama, the brother of John Mahama, and also for being rich, a lot of people don’t really take time to know him the person he is and so when I met him, it wasn’t so long, but I got a glimpse of him in terms of his honesty.”

Meanwhile, young artist Ibrahim Mahama who is only 35 years of age can boast of his works going global. He is a young graduate from the Kwame Nkrumah University of Science and Technology, Ghana.

His career began fully during the prestigious 56th International Art Exhibition of the Venice Biennale in 2015, he seized the opportunity to present his artwork.

He had his career booming after this showcase, earning him an internationally recognized artist representing Ghana on the global map.

This young artist has enviable records of purchasing planes, developing a studio through which he impacts the younger generation and now earns millions of dollars from his works.