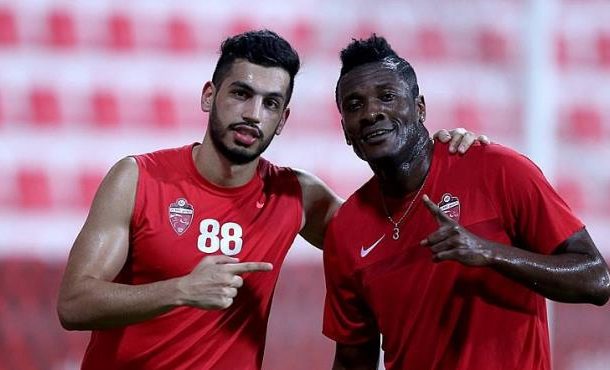 Black Stars captain Asamoah Gyan really enjoyed himself coming from the bench to score in his debut game for new Club Al Ahli.

Gyan after scoring against his former Club Al Ain in a 5-1 League Cup match victory saw him make a personal record by scoring in his debut games for his last four Clubs.

The Baby Jet of Ghana Football who had failed to find the back of the net at his previous Clubs Udinese, Rennes and Modena scored for Sunderland as they defeated Wigan Athletic 4-2 in the English Premier League.

The 30-year-old was on target again in his first game for UAE side Al Ain after joining them from Sunderland.

The striker proved his worth having signed a bumper deal to join Chinese Club Shanghai SIPG by scoring in his opening game for the Club against Tianjin Teda.

He was again on target for Al Ahli when they thumped Al Ain 5-1.

He scored on his debut game for the Black Stars in 2003 when he came on as late substitute for former Ghana international and Asante Kotoko striker Isaac Boakye in a 5-0 win over Somalia at the Accra Sports Stadium.