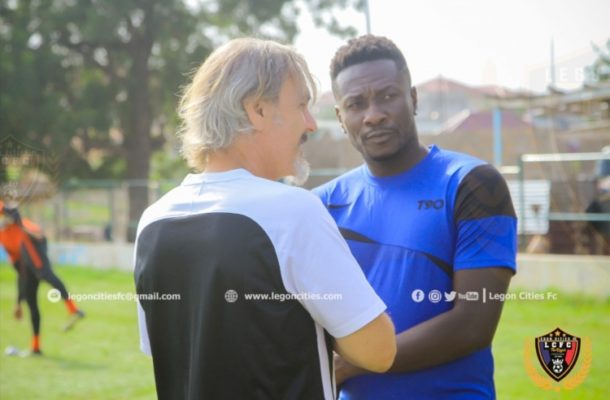 Beleaguered Legon Cities coach, Goran Barjaktarevic  is under pressure after the team's poor performance in their opening two games this season.

The money bags have only a point from their first two games having played Berekum Chelsea and Great Olympics.

On Friday, it was a humbling against a hungry looking Great Olympics side who tamed the wealthy Legon Cities by 3-0.

With about thirteen players signed so far, it has not improved the general play and fortunes of the team as they keep struggling.

One man who is conspicuously missing from the team is legendary former Black Stars captain Asamoah Gyan.

He is yet to play a single minute for the royals since joining them on transfer deadline day with his fitness a source of worry.

According to coach Goran Barjaktarevic, Asamoah Gyan is working on regaining his fitness and will join the team very soon but can't tell exactly when he will return to the starting eleven.

“Very soon, very soon. I don’t know the actual date but you will see him very soon.”

“He is close to return to the pitch." he told reporter after the Great Olympics thrashing.