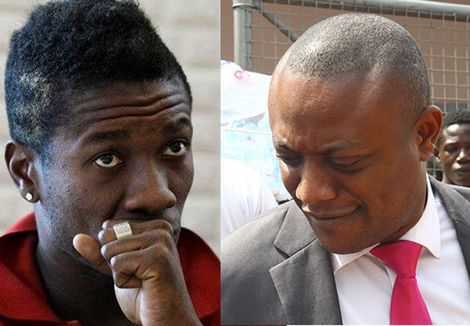 This revelation happened in court on Tuesday, 20th September, 2016 when the Investigator in the case, told the court that he extracted voices of the four accused from a CD– and in that voice recordings, the four can be heard loud and clear, planning on how to extort money from Gyan for allegedly raping and sodomizing Sarah Kwablah.

The Investigator told the court that he gave the said voices to the complaint in the case – in the person of Samuel Anim Addo, who is the manager of Asamoah Gyan to tender in court. Sammy, on 10th February, 2016, Samuel Anim Addo tendered the audios and was duly played in open court for all to listen.

LAWYER AMPAW EXPOSES INVESTIGATOR
Lawyer Maurice Ampaw who is the defense counsel for the 4 accused, exposed the Investigator in wrapping up his cross-examination by telling the court how the Investigator, doctored the voices of the four accused by stitching their voices together, so that when one listens to their conversations, it sounds or appear as though they planned evil against Gyan.

He also told the court how the Investigator deleted some voice recordings which the latter knows can help Osarfo and the others prove their innocence in the trial. “When you were extracted those audios, was any of the accused present or witnessed it?” Lawyer Ampaw asked the Investigator – who responded, “No my lord.” Asked to explain why, he said “nothing my lord.”

SIX MONTHS LATER
Six (6) months after the tendering of those extortion tapes which were labeled exhibit C in the court’s records, the audios turn out to be mere pictures and a video – which the prosecutor and the Investigator, could not identity what they are about.

PROSECUTION’S PLEA OVER-RULED
The prosecutor therefore argued that the court should allow them play the same audios from a laptop or upload the audios from the laptop unto a pen drive – but the trial judge ruled, “That is now possible because these new audios you claim and the laptop are not exhibits in the court’s records. They have not been tendered and cannot be tendered at this time.” The trial judge however, admitted that she recall the alleged extortion taps was played in court.

BENCH WARRANT ISSUED AGAINST EKOW MICAH
Sarah Kwablah and Ekow Micah were absent in court. Lawyer Lampting Apanga, told the court that Sarah’s absence is due to severe abdominal pains she is suffering as a result of her menses but Ekow was on his way to the court – an excuse the judge refused to accept and for that matter issued a bench warrant for his arrest.
Next Adjournment

The case continues on 4th October, 2016. The Investigator is expected to present to the court, Osarfo’s laptop, desk top computer, modem, phone, bag and others which they went to his house at 10: 30 pm to take to assist investigations– after which he will be discharged. Source: Nkonkonsa.com