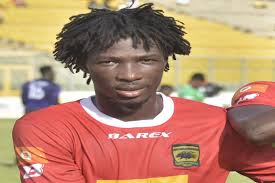 Communications Director of Asante Kotoko Lawyer Sarfo Duku has allayed fears of their supporters over the future of sensational forward Sogne Yacouba.

The Burkinabe import has quickly established himself as a key member of the team since joining on a three-year-deal at the start of the 2017/18 campaign.

He was the star attraction on Sunday when he bagged a brace to help the Reds beat sworn rivals Hearts of Oak 2-0 in the first leg of the Super 2 Clash friendly match.

With several clubs abroad reportedly eyeing a move for the 26 year old marksman, Lawyer Sarfo has assured the club will not listen to any offers.

“All that our supporters need is win, so when you sell your priceless asset from the club the supporters may be furious” he told Kweku Sarpong Sarkodie of Bryt FM.

“So what we are going to do is that, we will augment our squad with four  players who have the qualities of Yacouba, so that there will be a stern competition in our team and in doing so, if Yacouba switch camp in the years ahead we can have a replacement” he added.

According to him, the Kumasi based club will never sell their star man without getting a replacement for him.

“We will do everything possible to maintain him at the club and we are ready to go beyond Ghana in augmenting our squad.” he ended.