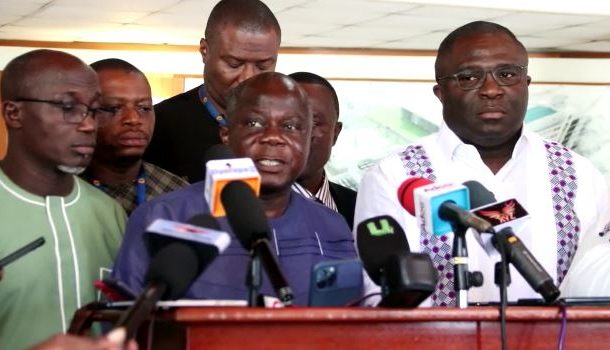 Members of Parliament in the Ashanti Region have defended Majority Leader, Osei Kyei-Mensah-Bonsu, who was recently 'attacked' by some of his constituents over the bad nature of their roads.

The Chairman of the Ashanti Caucus, Kwame Anyimadu Antwi said at a press conference, on July 21, 2022; that the attack on the MP for Suame was condemnable and called on the agitators to apologize to their MP.

“We highly condemn this act. I am not sure Mr. Osei Kyei-Mensah-Bonsu has been given resources that he had to use within the region which has not been used,” he stated.

According to him, development issues in the region known to be the electoral World Bank of the governing New Patriotic Party, NPP, needed to be given more urgent attention.

To that end, Anyimadu Antwi, who is MP for Asante Akim Central disclosed that his Caucus will soon seek an audience with the President on concerns by their constituents especially relative to road construction.

“We have Kwabre East – the roads within Kwabre East are very bad and there are constituencies like Manso Adobea, Nkwanta, Bantama, Kwadaso…, Asante Akyem North and South. So virtually, all the constituencies have some concerns which are roads,” he said.

He stressed that fixing the roads will inure to the good of the region. He added that another area of concern his Caucus will raise in due course is that of electricity supply to the region.

Some artisans at the Suame Magazine in the Suame Municipality of the Ashanti Region on Monday, July 18, 2022, hooted and pelted their Member of Parliament with sachet water over the bad state of roads in the Constituency.

The MP was there to inspect the abandoned Suame highway which the artisans said had claimed a life due to its deteriorated nature.

The angry artisans upon hearing of the arrival of the MP thronged the highway and started hooting, pelting him with sachets of water. They also blocked some roads in videos sighted by GhanaWeb.

According to the MCE, the MP managed to make it to a meeting point where he met leaders of the workers’ groups and explained to them what was being done to address their concerns.