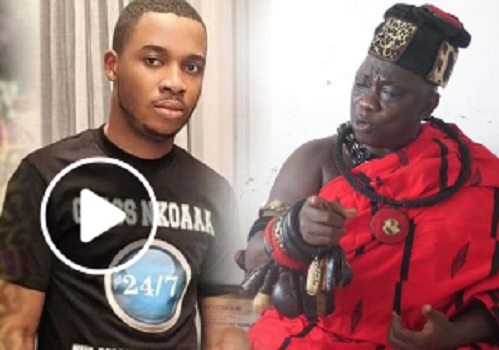 Days after slandering the ruler of the Asante Kingdom, His Royal Majesty - Otumfuo Osei Tutu II over galamsey menace, it has emerged that popular US-based Ghanaian social media commentator, Twene Jonas, is being tormented by the gods and ancestors of the Asantes.

This was revealed by the Chief of Nkwatakese, who doubles as Otumfuo Brempong, Nana Boakye Yam Ababio.

It comes after Twene Jonas lashed out at the respected king over his refusal to expose traditional rulers and political activists who are causing destruction to our lands and water bodies through illegal mining.

According to Twene Jonas, those in control of the country's affairs including the Asantehene cannot speak truth to power hence their inability to win the galamsey fight.

You recall that during the Regional Consultative Dialogue on Small Scale Mining at KNUST in Kumasi on Wednesday, May 13, 2021, Otumfuo Osei Tutu II revealed that the Ashanti Regional Minister, Simon Osei Mensah and Minister of Lands and Natural Resources, Samuel Abu Jinapor came to plead with him prior to the event that he should stick to a script.

“Yesterday, they came and mentioned a lot of things which will probably stir up trouble if I should touch on them,” Otumfuo disclosed.

But, in reaction, Twene Jonas said he could not fathom why the Asantehene found it difficult to expose the nation-wrecking chiefs who have sold out all our lands to illegal mining operators.

He, therefore, reprimanded that the politicians and the traditional rulers including Otumfuo himself have failed the people; and thus used unprintable words against them.

Responding to the insults, however, Nana Boakye Yam Ababio said Twene Jonas was too young to drag the name of the Asantehene in the mud and that he had bitten what he could not chew.

The Otumfuo Brempong disclosed that Jonas was a dead person in the spiritual realms as according to him, no one can make false and damaging statements about the Asantehene in the manner he did and go unpunished.

"He should begin to wail wherever he is. He will never go unpunished for insulting the Asantehene. As a matter of fact, he is a living dead," he said.

He further disclosed that Twene Jonas has started experiencing sleeping disorders and that until he swiftly renders an unqualified apology to Otumfuo, he will never be successful in life till a devastating ailment strikes him to his early grave.

"Even as we talk now, something is pressing him. Find out from him if he is able to sleep, he can never sleep because we have been very much hit for disrespecting our king. If he has something to do, the time is now, he must act fast before it gets too late," he told Oheneba Media in an interview monitored by Ghanaguardian.com.