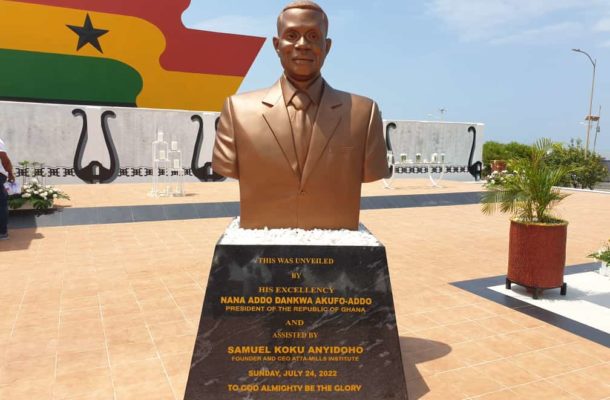 The minority in parliament has berated President Akufo-Addo and the Coastal Development Authority(CODA) for the omission of the name of the late former President, John Evans Fiifi Atta-Mills from the bust made in honour of the late President.

A statue erected to commemorate the passing of the late John Evans Atta Mills omitted the name of the former leader.

The monument was erected at the Asomdwee Park in Accra, as part of efforts to renovate the graveyard of the former president.

The bust which was unveiled on Sunday, July 24, 2022, had the name of the President, Nana Addo Dankwa Akufo-Addo, and that of Atta Mills’ former aide and founder of the Atta Mills Institute, Samuel Koku Anyidoho, engraved on it.

“This was unveiled by His Excellency Nana Addo Dankwa Akufo-Addo, President of the Republic of Ghana and assisted by Samuel Koku Anyidoho, Founder and CEO Atta Mills Institute. Sunday, July 24, 2022. To God Almighty be the Glory,” the words on the monument read.

But the minority through its leader, Haruna Iddrisu in an interaction with the media expressed its displeasure with the error committed by government and its associates.

“…We find that incredibly unacceptable and offensive,” the Minority leader said.

Mr Haruna has then called on President Akufo-Addo and others who erected the bust, with immediate effect to change the inscriptions and replace it with the name of the late former President Evans John Atta-Mills and a brief history about him.

The late President died on Tuesday, July 24, 2012 while serving his tenure as the 3rd President of the fourth Republic.