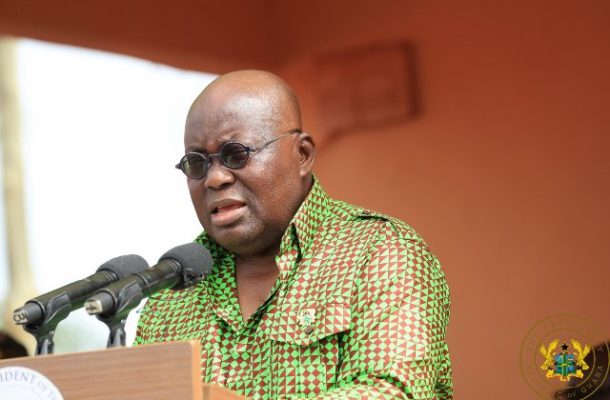 President Nana Akufo-Addo has condemned the recurring political violence in the Asunafo South District and directed the police to deal decisively with any breaches of the law.

The area is mired in unending cycle of brutal physical attacks between supporters of the governing New Patriotic Party (NPP) and the National Democratic Congress (NDC).

In April this year, Asunafo South MP, Eric Opoku, and three other members of the main opposition NDC suffered vandalism against them. Their homes and properties were targeted by unknown assailants.

President Akufo-Addo said such behaviour was completely unacceptable, adding that anybody who broke the law should be prosecuted, irrespective of political affiliation.

“When you meet loved ones and you don’t put the truth before them, it’s not the best. The nasty conflict that is going on in Asunafo South, where we pick up cutlasses and weapons to attack each other because of politics; this is village life… it’s not the best.

Inaugurating a newly-built office for the Asunafo South District Health Directorate at Kukuom on day two of his three-day tour of the Brong-Ahafo Region, the president said: “Crime has no political colour. If someone attacks another with a cutlass, you don’t use their political colours to judge. What is important is that such a person has committed a crime and the law must take its course.”

He said there would be peace and tranquility if crime suspects were made to face the full rigours of the law.

He also cut sod to signal the start of construction works of an Administration Block for the District Assembly.

He was accompanied by some Ministers of State and Members of Parliament (MPs) in the area to engage with the chiefs and people about their development needs.

At Hwidiem, President Akufo-Addo inaugurated a special ward for the Saint Elizabeth Hospital.

The "Janet Awuah Special Ward” cost about GHS360,000.00 to complete and was funded by Mr. Yaw Owusu-Brempong, a Philanthropist and Chief Executive Officer of Venture Capital Trust Fund.

It has six rooms, a nurses’ station, washroom and bath, hospital beds and mattresses. It is also fixed with air conditioners and flat screen television sets.

President Akufo-Addo said the government recognised the vital contribution the churches had been making towards health and education, and praised Mr. Owusu-Brempong for the project.

He repeated that his government inherited a National Health Insurance Scheme (NHIS) debt of GHS1.2 billion, out of which, GHS1 billion has been paid.