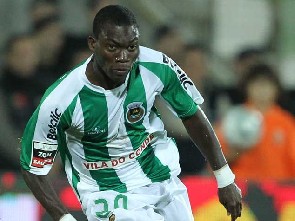 Ghana international Christian Atsu was introduced with 17 minutes left to play in Newcastle United's 2-0 revenge win over Wolverhampton Wanderers in the English League Cup on Tuesday.

The former FC Porto winger, who joined the Toons on loan from Chelsea during the summer transfer window, was tossed into the game as a 73rd minute replacement for Yoan Gouffran who was given a standing ovation by the Magpies for his outstanding strike.

Atsu has starred in two second-half appearances for Newcastle in the Championship since his season-long loan arrival and could not make a start in the Cup game.

The Black Stars winger had featured for Rafael Benifez's 2-0 reverse against Wolverhampton in the Championship on Saturday but they turned the tables to hammer them 2-0 in the Cup game.