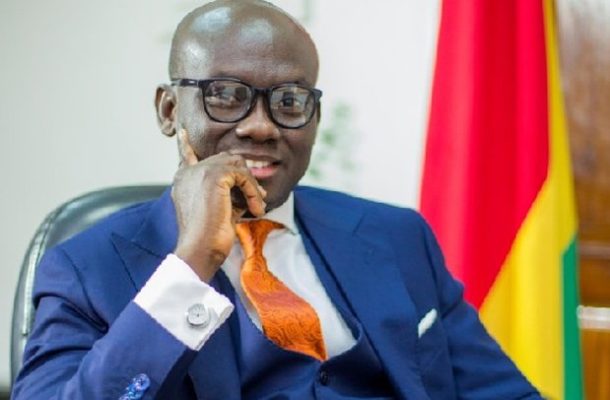 The Attorney General and Minister of Justice, Godfred Yeboah Dame has called the bluff of Speaker of Parliament over directive to the General Legal Council (GLC) to admit 499 LLB studnets into the Ghana School of Law.

According to Mr. Dame, Parliament does not have the powers to direct him to make sure that the General Legal Council and the Ghana School of Law admit LLB students who obtained the 50% pass mark.

It would be recalled that on Friday October 29, 2021, Parliament passed a resolution to compel the GLC to admit all the 499 aggrieved law students who obtained at least 50% in the entrance exams but had been denied admission to the Ghana School of Law.

However, responding to the directive in a letter dated November 1, 2021, the Attorney General stated that Parliament’s powers are limited as far as admission into the Ghana School of Law is concerned.

“Respectfully, I am aware of a resolution passed by Parliament at its sitting on Friday, 29th October, 2021 in these terms: … The General Legal Council is hereby directed to proceed and admit all the students who passed in accordance with the advertised rules of the examinations. The Attorney-General is the leader of the bar in Ghana and he must see to it that the directive that 499 students who scored 50 marks are admitted is complied with.

“We do not want to get to contempt of Parliament issues. Whilst recognising the general legislative powers of Parliament in Ghana, except as have been circumscribed by the Constitution, I am constrained to advise that Parliament is devoid of a power through the use of Parliamentary resolutions, to control the process of admission into the Ghana School of Law.

“The mode of exercising legislative power enshrined in article 106 of the Constitution does not admit of resolutions. In accordance with section 13(1)(e) and (f) of the Legal Profession Act, 1960 (Act 32), the power to regulate admission of students to pursue courses of instruction leading to qualification as lawyers and to hold examinations which may include preliminary, intermediate and final examinations has been vested in the General Legal Council.

“It is correct that section 1(5) of Act 32 stipulates thus: “The Council shall in the performance of their functions comply with any general directions given by the Minister”.

“In my respectful opinion, this provision underscores the capacity of the Executive not the Legislature, through the Minister responsible for the General Legal Council, i.e. the Attorney-General and Minister for Justice, to direct and advise the Council on major matters of national importance.

“In this regard, it is pertinent to indicate that by a letter dated 18th October, 2021 received at my office on 21st October, 2021, His Excellency the President forwarded the contents of a petition by the “499 candidates” to me for my comments in order to enable him to respond. Another petition dated 20th October, 2021 by the National Association of Law Students was also delivered to the President.

“Upon delivery of my comments on the matters raised in both petitions and following further consultations with my good self, by a letter dated 26th October, 2021 (three clear days before the resolution of Parliament), received at my office on 27th October, 2021, the President directed me to, pursuant to section 1(5) of Act 32, … make the necessary intervention to the General Legal Council, on behalf of the 499 students, to address the issue.

“Within the constraints of the law, I am following up on the directive of the President to make the necessary interventions on behalf of the ‘499 students’ Be that as it may, it is imperative to correct a few erroneous impressions contained in the impugned Parliamentary resolution of 29th October, 2021.The notice in the Daily Graphic of 14th May, 2021 inviting applications from suitably qualified Ghanaians for admission into the Ghana School of Law did not state a pass mark of fifty percent (50%) or any at all as a basis for admission.

“The notice stated that applicants may be granted admission if they have passed the entrance examination conducted by the GLC.

“The notice also did not state the manner in which a pass mark set by the GLC would be determined. It is clear therefore, that, a contention that the “originally announced” or “advertised” pass mark was “50%”, is erroneous and insupportable”.

“The admission process is as follows:
(i) The General Legal Council determines the number of candidates to be admitted to the Professional Law Course for the academic year.

(ii) Applicants may be granted admission if they have passed the written examinations organized by the General Legal Council for the 2021/2022 Academic Year, on payment of the required fee and submission of the application form and all supporting documents required online,” according to the letter addressed to the Speaker.

Meanwhile, an Accra High Court presided over by Justice Nicholas Mensah Abodakpi last Friday adjourned sitting to November 9, 2021 in the case involving the 499 students challenging the decision of the General Legal Council. 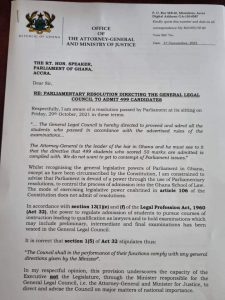 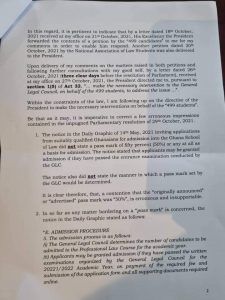 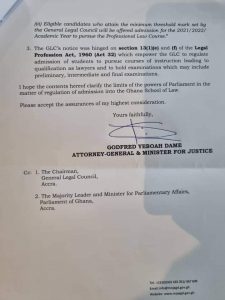