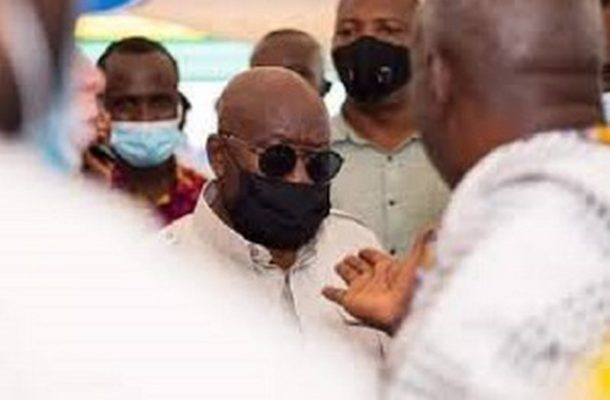 New Patriotic Party (NPP) parliamentary candidate for the Kpone Katamanso Constituency has rubbished claims that the paramount Chief of Kpone walked out on President Nana Akufo-Addo during the sod-cutting for the construction of a district hospital in the area.

According to reports, Nii Tetteh Otu II was furious when he saw the artist’s impression of the project which he taught was a one-storey building.

In a video, the angry chief is seen walking out of the durbar grounds after he had poured his heart out to President Akufo-Addo.

Not even the plea by his council of elders could get him back to the durbar grounds.

But reacting to the development on Adom FM’s morning show Dwaso Nsem Tuesday, the NPP firebrand, Hopeson Adorye said after the sod-cutting, the chief only suggested that the project, after completion, should be a one- storey building and not what had been projected which the President even agreed to it.

“After the sod-cutting process, the chief spoke and pleaded with the President to support the constituency. I was the one who even introduced the President and he even responded to the plea of the chief.

“We then moved to go cut the sod and they showed us the architectural design which the paramount chief only said he wished could be a storey building so the president even agreed and asked that he speaks to the contractor and know the way forward and the President left afterwards,” he said.

He said the President was not even aware of what happened behind him after the sod cutting and there was nothing like a snub from the chief.

To him, the National Democratic Congress (NDC) is only making noise over the matter and always wants to interfere in developmental projects in the country.

Mr Adorye stressed he knows the chief and believes he won’t snub the President, adding that it is only the plans of the NDC to stall developmental projects in the constituency.

Listen to audio below: