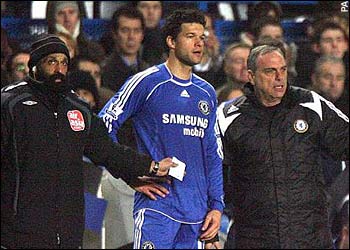 Grant, who also coached Ghana's senior National team, the Black Stars, took over from Mourinho in the 2007/08 season when the former parted ways with the Blues.

He to the Champions League final in Moscow, where they suffered a heartbreaking penalty shoot-out defeat to Manchester United.

Ballack, however, thinks Grant swiftness made him one of the exceptional brains he worked under.

"He never really had a chance. It is really difficult, after Jose Mourinho, to work at Chelsea," Ballack said of Grant, who was sacked after just eight months at the helm.

"It could cause a problem for any manager because Mourinho had such a relationship with the players and the fans.

"Grant managed the team in a different way. A lot of players thought he would be weak, but he wasn't. He was really smart and intelligent."

After one championship season managing Partizan Belgrade and one season as the technical director for Thai club BEC Tero Sasana, Grant was appointed coach of the Ghana national football team in 2014 and guided the side to reach one Africa Cup of Nations (AFCON) final where they sadly lost out on penalties to Cote d’Ivoir