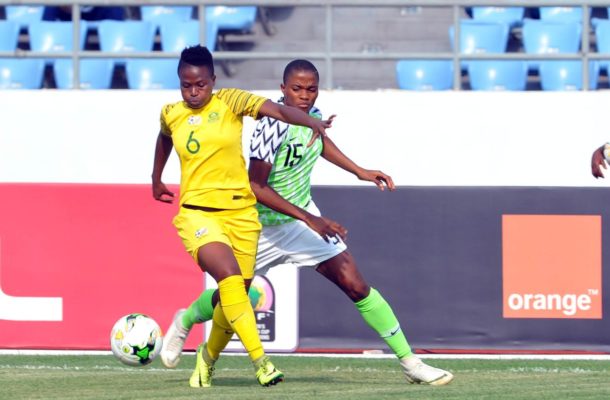 The final of the 2018 African Women Nations Cup (AWCON) is upon us with old foes Nigeria will be taking on South Africa in Accra.

The tournament has no major surprises with except for South Africa’s Banyana Banyana finishing above Cameroon and Ghana.

South Africa have never won the AWCON and face the eight-time champions Nigeria on Saturday, December 1, 2018, at the Accra Sports Stadium.

Who is likely to lift the title between Banyana and the Falcons on Saturday?

The West Africans started with a blip by losing the opener against South Africa. The number one-ranked nation in Africa responded with fury by smashing Zambia 4-0 and Equatorial Guinea 6-0 to progress to the semi-finals.

The Nigerians did not have it all easy in the semi-finals though. Cameroon held them to a goalless draw after extra time. It was from the penalty kicks where the Nigerians earned a 4-2 win to set up a rematch with South Africa on Saturday.

Nigeria have never lost in an AWCON final, so if there’s any side capable of pulling through, it’s the ladies in green, because they’ve done it time and time again.

They defeated Banyana in the 1995 and 2000 finals, and winning the tournament has certainly become the team’s trademark.

Super Falcons Victory Dance After The With Cameroun. pic.twitter.com/bNKrkMLyHY

South Africa who have impressed throughout the tournament overcame Mali in the semi-final, putting two unanswered goals past the Female Eagles to reach the finals of the competition.

According to team South Africa, they have already achieved their ambition at the ongoing Africa Women Cup of Nations, even before stepping into Saturday's final against nemesis Nigeria.

Now that on its own is a big reason why Banyana Banyana are more likely to win the decider.

Nigeria, who are the team to beat in women’s football, will be seeking revenge against the South Africans who stunned them (1-0) in their opening game at AWCON 2018.

"For now we celebrate and prepare for the final match on Saturday…now that we have that out of the way, the next target is retaining the trophy," said Nigeria’s coach, Thomas Dennerby.

Desiree Ellis also said "We will celebrate tonight and start preparing for the final. We have never won the Women’s AFCON and we are going to give it shot and see what happens on the weekend."

Although the three-time African Female Footballer of The Year was blunt in her first two matches for the Super Falcons at AWCON 2018, Oshoala returned to her fiery form on Saturday with a treble, which now puts her only one goal behind Kgatlana.

Oshoala was the top scorer at AWCON 2016 in Cameroon, which she ended with six goals, and she will now aim to outdo Kgatlana, in order to be crowned the latest back-to-back winner of the competition’s golden boot prize.

Although she started her side's first game from the bench against Nigeria but came on to make the changes for the Bayana Bayana and has since scored in every game she has played in the tournament.

The prolific attacker has also emerged Woman of the match for three consecutive times.

Kgatlana is the leading scorer at the 2018 AWCON with five (5) goals including the match winner against Nigeria in a group game and many connoisseurs have tipped her to win the best player in the competition.

Read also: 2018 AWCON: South Africa coach hoping to beat Nigeria for the trophy
AWCON 2018 also acts as the African qualifiers to the 2019 FIFA Women’s World Cup. Nigeria and South Africa thereby confirmed their slots at the tournament which will take place in France in June 2019.