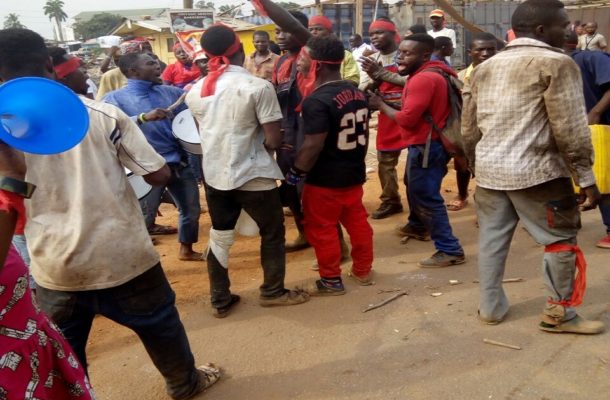 A police officer with the Ahafo District Command in the Brong Ahafo Region in an attempt to halt junior workers of Newmont Mining Company from demonstrating, has lost his left eye by an astray stone.

The junior staff of Mining giant, Friday morning registered their displeasure after management of the company refused to increase their salary as promised.

According to the demonstrators, they needed an explanation on why their salaries were not increased, but they were ignored they decided to demonstrate till their needs are met.

The angry workers then blocked several roads preventing senior staff of Newmont Mining Company from going to work, compelling authorities to call on the police to rescue the situation.

The police allegedly released teargas and other harmful chemicals which injured several demonstrators.

Following the uproar, the District Police Command of the Ahafo District, Commander Takyi Opoku, in an effort to calm down the situation, told the junior staff to exercise restraint to bring peace.

But, some workers refused to accept the peaceful settlement and proceeded to vent their anger by throwing stones at the police, an action that led to the eye of the police officer being damaged in the process.