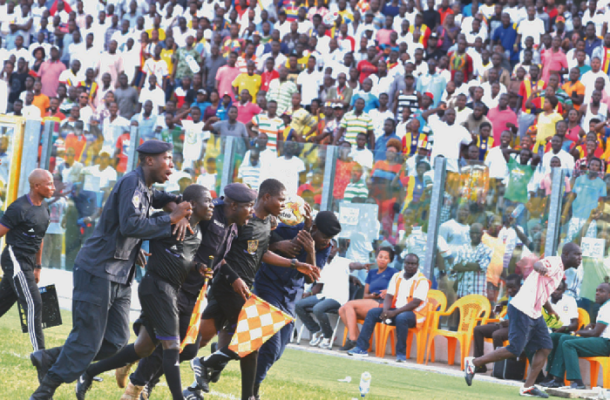 After the 2017/18 Ghana Premier League season was truncated due to the airing of the number 12 documentary. The 2019/20 season league return on December 28.

Referees maltreatment is also not new to the Ghana top flight league and other lower leagues as some officials have even received the highest beatings of their life.

Football fans continue to take their laws into the hands by giving a fair share of their emotion to match officials in the past seasons, even in recent NC special competition refrees were accused of bribery and corruption.

What the new Ghana FA led by President Kurt E.S Okraku must do to protect officiating officials at match venues.

The decisions of the referee and all other match officials must always be respected by the team involved in the game so also the fans.

The Premier league management should ensure that the match day officials are being placed under well tight and protected security at match day venues to avoid any attacks on referees.

Also, the welfare of the referees should be taken seriously; they should be paid their match allowance as at when due to close the gap of match-fixing.

There is a need to bring up media awareness to sensitize the general public most especially football loving fans across Ghana how to conduct themselves before, during and after matches played around their environment, by letting them know that the round leather game is not a do or die affair.

The Premier league management should further place heavy sanctions on club and fans that are found wanting in committing such crime, if possible, banished the offending clubs for the whole season.
Persons responsible for maltreating any match officials at match day venue should be arrested and face the riot of the law or charge to court this will send a message to other to be of good conduct.

They should be heavy security present at the entrance of all match venue to carry out an intensive search on fans to counter any harmful instruments that should not be allowed in the stadium.