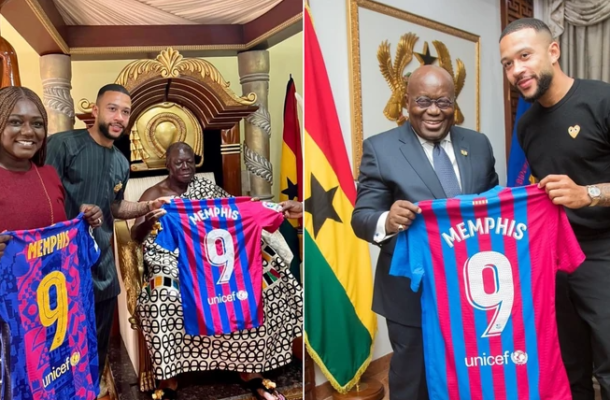 The Barcelona forward was accompanied by he CEO of The Ghana UK Based Achievement (GUBA) Awards, Dentaa Amoateng who also doubles as the International and Diaspora Relations Manager of Kotoko.

He had earlier over the weekend renovated the washrooms of the Cape Coast School for the Blind and Deaf in Cape Coast.

Barcelona commented on the forward's tweet expressing his happiness for meeting Ghana's President.

“Grateful to meet the president of a country that I love so much. Coming back home feels always amazing and Ghana is the future y’all stay tuned!,” Depay wrote.

“Spreading the Blaugrana love. Memphis in Ghana,” the Spanish giants tweeted in response to the winger’s post.


Depay is on vacation in Ghana something which he often does during the off season as he has Ghanaian roots.

The 28 year forward and his entourage met the Ghanaian President and presented him with a signed Barcelona jersey.