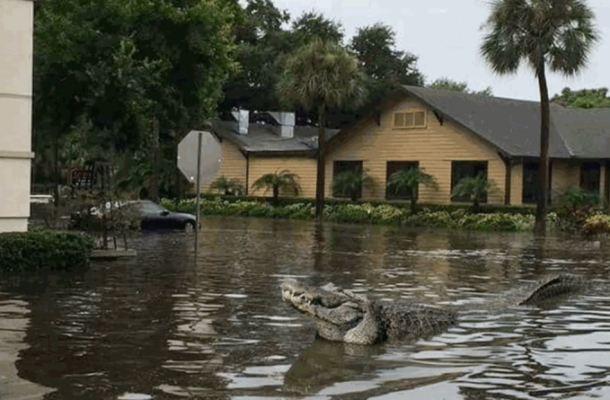 The media isn’t reporting how big and dangerous the floods in Lousiana are, focusing instead on the drama of the Presidential race. But now alligators are now swimming down luxury avenues in Baton Rogue.

Rescuers are taking out hundreds of pets as they go door-to-door searching for people.

Lt. Davis Madere from the Louisiana Dept. of Wildlife and Fisheries, says the first priority is always rescuing humans.

But he says he and his teams have rescued at least 100 pets since they started working Friday.

He says they’ve rescued cats, dogs, birds — even a gerbil.

Madere says rescuers have encountered lots of snakes while out on the water and deadly alligators.

He said their teams also have to be on the alert for other dangers such as submerged vehicles or fences and power lines a lot closer than they would normally be because the water is so high.