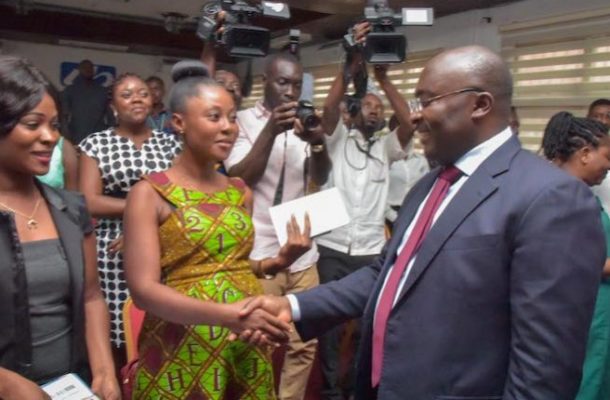 Vice President Dr Mahamudu Bawumia, on Wednesday 25th July, 2018 surprised some applicants of the Nation Builders Corps (NABCO) who were scheduled for interviews at the offices of the Accra Metropolitan Assembly (AMA).

The visit by the Vice President was to evaluate the ongoing interviews with applicants for the and interact with officials of the programme.

The Vice President also interacted with applicants waiting to take their turn before the five-member panel made up of representatives from Labour, the National Service Secretariat and other key stakeholders.

President Nana Addo Dankwa Akufo-Addo launched the NaBCo in Kumasi on Tuesday, May 1, 2018 as an initiative by the government to provide employment for 100,000 unemployed graduates this year.

The programme will initially operate seven modules designed to meet the pressing needs of the nation, while providing jobs for the teeming youth who have received tertiary education but are struggling to find jobs.

The beneficiaries will be engaged for three years, and they are expected to earn a monthly stipend of GH¢700 each.

Vice President Bawumia, who sat through an interview and heard at first hand the challenges faced by unemployed graduates in their job search, later interacted with applicants waiting to appear before the panel and urged them to put their best foot forward in the competition for places in the 100,000 NABCO jobs market.

Speaking to the media, the Vice President explained the rationale behind the implementation of NABCO.

“This whole exercise is really to fulfil the vision of the President, Nana Addo Dankwa Akufo-Addo as far as job creation is concerned. We have many policies and initiatives that we want to use to address the high level of employment. The President has brought this initiative, the Nation Builders Corps, where we are going to hire 100,000 graduates across the country. I know that so far, over the past six weeks a lot of interviews have taken place on in all 254 districts. As at today, the information I have is that 137,000 applicants have been interviewed.

“We also are making provision for persons with disability in the next couple of days, so that we don’t leave them behind. We intend to tackle the issue of graduate unemployment head-on.”

The Vice President urged the applicants to support Government’s vision of accelerated, holistic national development which includes every member of the Ghanaian society.