Below par William Opoku Mensah shown the exit at Kotoko 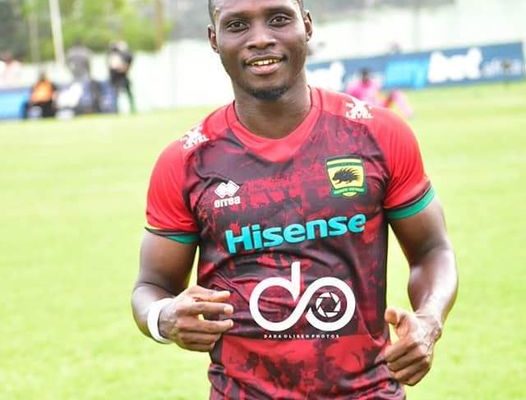 After Sulley Muniru, another player has been shown the exit at Kumasi Asante Kotoko with striker William Opoku Mensah the casualty.

The 25 year old striker has been released by Kumasi Asante Kotoko after they failed to renew his contract after its expiration.

William Opoku Mensah has been woeful in front of goal for the porcupine warriors since joining the club in 2019.

The former Karela United striker joined Asante Kotoko in 2019/2020 season on an initial one year contract with an option for an additional one year but the club have decided against taking the one year option following his poor output.

He scored a paltry two goals in eight appearances for Asante Kotoko in the 2019/2020 Ghana Premier League season before it was truncated.

Opoku Mensah joined Kotoko as a free agent following the termination of his contract with lower tier American side Swope Park Rangers following his poor form.

He made four appearances for Asante Kotoko in the 2020/2021 League season failing to score any goal and featured in Kotoko's CAF Champions League first leg 1-0 loss to Al Hilal.