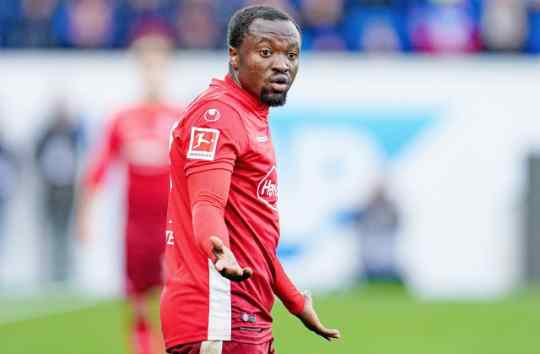 Ghana' Benard Tekpetey looks rejected after his club Dusseldorf indicated  new  striker Steven Skrzybski is "exactly the type of player we have been looking for".

Steven Skrzybski, 27,  joined Fortuna Düsseldorf from Schalke 04 on a loan deal until the end of the season which includes a buyout option.

Tekpetey could neither score nor assist in single goal for the club  and the statement from manager Lutz Pfannenstie puts the Ghanaian's position  under threat.

His description  on Skrzybski indicates he falling  out of favour with  the 22-year-old Ghanaian.

"Steven Skrzybski is exactly the type of player we have been looking for," Lutz Pfannenstiel said.

"He has a great mentality and is a versatile offensive player who has already proven himself in the Bundesliga.

"He is fast, assertive and enthusiastic. We are sure that he can be an enrichment for us right away," said Fortuna boss Lutz Pfannenstiel in a statement."

The Ghana international has failed to replicate the form which saw him bang in 10 goals for Paderborn to win last season Bundesliga II which earned them promotion.

Fortuna Dusseldorf lie one place and one point above the demotion mark after 17 rounds of matches.