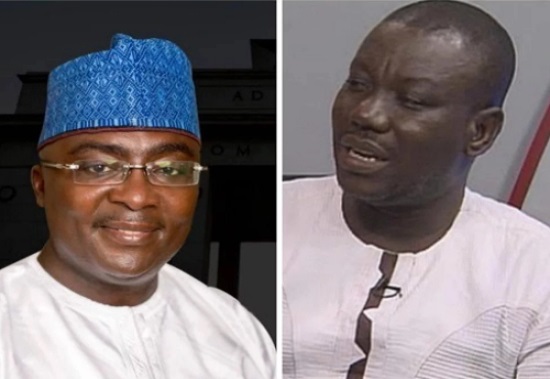 A member of Parliament’s Finance Committee and MP for Bolgatanga Central, Isaac Adongo says Vice President Mahamudu Bawumia should be blamed for the needless conversation of politics around the local currency[Cedi].

He accused the VEEP for creating the platform for these political wranglings on the Cedi while in opposition years ago because he wanted political power badly.

Speaking on Anopa Kasapa on Kasapa 102.5 FM, Adongo said there is currently so much scrutiny of the cedi which he observed is unnecessary.

To him, the exchange rate is a shock absorber used by the BoG to fight volatility and external pressures adding “when we begin to allow politics play into it then we begin to interrogate certain things that the Bank of Ghana is doing that generally the public mustn’t even know so that it can be able to fight these matters.”

He cautioned:”The government officials should restrain themselves from too much political talk on the cedi. The strength of the Cedi depends on the external volatility; you as a minister have no power to tame local currency. Someone can just come out to say that you are so smart to the extent that you’ve locked up the cedi and given the keys to the Police. I want the managers of the economy to be mindful of the fact that the exchange rate volatility also depends on speculation and precautionary buying of the currency, and as a result they must manage their utterances in order not to bring exchange rate into the political debate otherwise we’re going to have an exchange rate that will not reflect the fundamentals of our economy.”

In his view, Adongo said the NPP government’s “One District One Factory” will be a game changer and a point to a foreseeable halt in the depreciation of the cedi against major currencies like the dollar, if the policy becomes operational.

The move, according to Adongo will anchor the currency and shore up the weak economic fundamentals.

“We are there to support the policy, so the government should be encouraged and strive to bring the 1D1F to fruition so that the seeming import dependence will be tackled. Its quite worrying that after two years the 1D1F is yet to be rolled out in the various districts.”

The free fall of the cedi has become a nightmare to businesses as it has hit a record low so far for this year reaching a rate of ¢4.85 to one United States dollar.

The drop is affecting importers who have to issue more cedis for the dollar and other major trading currencies.

Meanwhile, the Deputy Minority Leader, James Avedzi, has predicted a further decline in the value of the Ghana cedi, following its recent free fall against the dollar.

According to him, the value of Ghana’s currency may stand at 5 cedis 20 pesewas to the dollar by December this year.

He attributes this to what he calls the poor management of the economy by the Akufo-Addo administration.