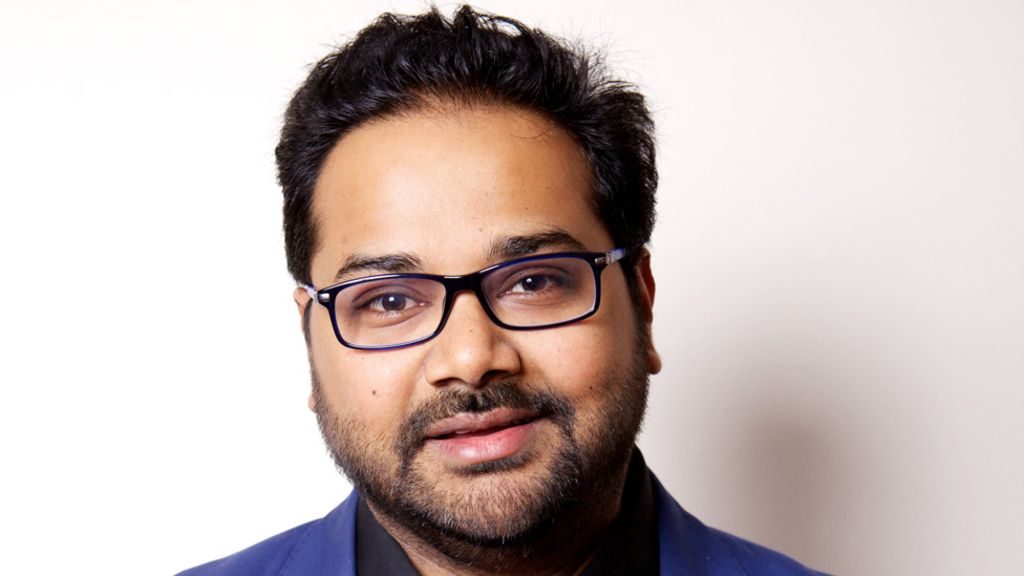 Ambarish Mitra ran away from home at the age of 15 to live in New Delhi's slums.
By the age of 17 he had 55 people working for him.

It is perhaps no surprise that Ambarish describes his life as "an adventure".

Launched in 2011, Blippar is an augmented reality app. Using your mobile phone's camera, it superimposes animation or graphics onto the world around you.
For example, focus on a limited edition can of Coca-Cola - a company which has a tie-up with Blippar - and it becomes an animated jukebox that enables you to play music.

Or point the camera at something like a humble apple, and a picture of the fruit will appear on the screen, plus a detailed guide to its history. The app also suggests related things to find out more about, such as cider or how to grow an orchard.

And Blippar is also proving rather popular. The company claims that the app has amassed more than 65 million users across 170 countries since 2011.


Raised in a middle class family in a mining town called Dhanbad, in the east Indian state of Jharkhand, Ambarish decided to run away from home after he started to fail classes at school. He was also unhappy that his dad wanted him to go into engineering, while he wanted to work in computers.

One day, after weeks of planning, he wrote a letter to his parents announcing his departure, packed a bag, and left.

"I wrote 'I'm going to Mumbai', which was something people always said in the films. It was very naive," says Ambarish, now 37.

The then 16-year-old's idea, to provide free internet to women earning below a certain wage, won.

Mr Mitra was motivated by the disparity he felt between the strong women in his family and the culture in wider Indian society.

So using the prize money, he launched Women Infoline. The firm's business model was that the funds it would make from advertising would enable it to provide internet access for free.

At its peak, Mr Mitra had 125 people working for him, but he says that at the time he "wasn't a very good leader".

He adds that the company, which he eventually floated and then resigned from in 2000, was "very, very unprofitable".


After pocketing some money from Women Infoline, and making up with his family, Ambarish moved to the UK.

He wanted to start a UK-based technology company, but success proved rather elusive.

"All the ideas were very cool - but I couldn't pull it off. I was not left with any money."

A stint working for an insurance company followed, where the entrepreneur says he joined at the "lowest level", and could do his entire week's work in six hours.

Ambarish says he become frustrated, and started drinking "quite heavily". But then, one afternoon in a pub in Surrey, south of London, everything changed.

He says: "I was my local pub… drinking with Omar [Tayeb, his Blippar co-founder].

"The last round of drinks was £15 - I put the money on the bar and made a joke, saying 'imagine if Queen Elizabeth came out of the bank note?'. It was just a silly joke."

Omar, who Ambarish describes as "the smart, educated one", made an app prototype of his friend's face superimposed over the Queen's.

Ambarish says it remained a trick that they would show people in bars, until he dawned on him that they should build an app that "looks at everything in the world, and give you content on top of it".

And so Blippar was born.


Growing quickly, Blippar now has offices in 12 locations around the world, including London, New York, San Francisco, Delhi and Singapore.

"We are big for a young company," says Ambarish.

While he says that the fast rate of growth has often been challenging, particularly in regard to hiring staff, Blippar has had no difficulty in raising funds.

The firm and its 300-strong workforce has to date secured $99m of investment, including $54m earlier this year from the Malaysian government's investment arm.

Blippar makes its money by doing tie-ups with brands, including publisher Conde Nast, carmaker Jaguar, consumer goods giant Unilever, and confectionary business Nestle to add more feature-rich content than the app simply telling you what the item in question is.

The app is also used by about 67,000 schools around the world - including in the UK, US, India and Canada.

Chris Green, technology analyst, says that part of the reason for Blippar's rising popularity is the fact that it doesn't require any specialist hardware - you simply use your smart phone.

"Its timing and ability to run over the top of existing technology is key, rather than requiring adoption of specialist hardware on par with Google Glass eyewear.

"The device aspect is important as its hardware that users are already comfortable with, so there's a far lower cultural barrier to use to overcome."

In future, Ambarish wants the app to recognise everything in the physical world.

And one of his other aims is for Blippar to help educate and inform illiterate people, such as providing audio guides for train networks.

Recently returning to Delhi to visit friends, Ambarish says he remembers that running away as a teenager "gave me the feeling that, hey, if I can survive this, I can survive anything."

He adds: "I'm excited for the adventure, and happy to be alive."