Bloggers earn over GHS4,000 since the launch of the GhanaWeb Reporter 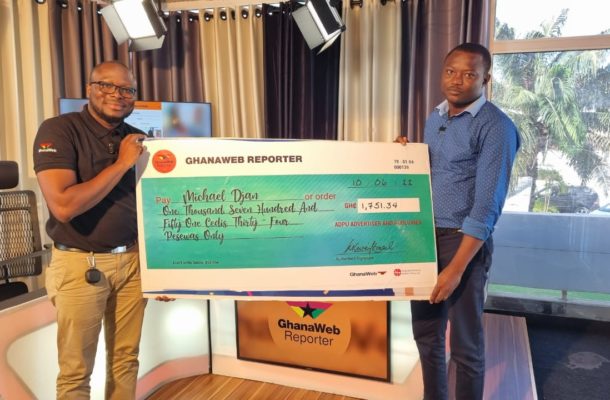 Launched in January to democratize journalism and empower content creators, the digital media sharing platform is the first of its kind in the country and two users have already withdrawn their earnings summing up to GHS 2,374.97.

Michael Djan, a French tutor in Accra and a blogger was the highest earner with GHS 1,751.34, and Michael Agyapong follows suit with an earning of GHS 623.63 of which he withdrew GHS 100 in April to “test the system”.

The two users are on the Professional Reporter account which is subscription-based and offers them monetized niche blogs and a content performance dashboard to keep track of earnings from advertising revenue generated by their blogs.

“I intentionally left my earnings…and anytime when I see it [grow], it motivates me… When I got to 1700 getting to 2,000, I said hmm, now the money is becoming huge and GhanaWeb, will they be able to pay me that money?” said Michael Djan in an interview with GhanaWeb.

“So, I also wanted to test the system and see whether the system really works. And I did, and truly truly, I was paid…I got it into my bank account,” he added.

For Michael Agyapong who earlier in April withdrew a hundred Ghana cedis to test the system, “after the 100, I didnt want to withdraw actually. I showed it to few of my friends and they were saying ‘are you sure this money is real’ and I said yes, I have even withdrawn 100 Ghana cedis.”

“So I had 500 cedis plus in my account waiting for it to grow more, but because I needed to show them that this is real, I requested for a withdrawal and I said ‘you just wait and see that this money would be paid’. And when the money was paid, I showed it to them and you should see how these people were rushing to get their accounts done and it was really amazing,” he added in an interview with GhanaWeb.

The blogs of Michael Djan and Michael Agyapong are French Education GH and Daily News Ghana respectively on the News page of GhanaWeb. Other blogs can be found in the navigation sections of the News, Sports, Business and Entertainment pages of the most visited website in Ghana.

Integrated into the GhanaWeb App, the award-winning platform running on both iOS and Android operating systems aims to give Ghanaians an opportunity to amplify their voices on issues that matter to them and for content creators to earn a share of the advertising revenue.

The GhanaWeb Reporter has two main user accounts which are the Basic Reporter and the Professional Reporter. The Basic Reporter is the default account and users can share videos, audio, files, images and text of news, entertainment and opinion content as well as their social media posts to the App at their convenience. The posts are screened for content violation and if approved, they are simultaneously published on the user’s page and on the GhanaWeb Wall.

Only Professional Reporter accounts get monetized niche blogs that earn them advertising revenue generated by their blogs. They also earn a share of the revenue from GhanaWeb’s Self-Service Advertising displayed on their blogs to promote local advertising.

Each GhanaWeb Reporter user has a specialized page with a custom URL and they have the ability to engage followers through the App’s private messaging feature.

To be a GhanaWeb Reporter, download the GhanaWeb App for free on the Google Play Store and the App Store. Go through the registration process and make your first post.

The Reporter would be introduced to other AfricaWeb platforms in Cameroon, Nigeria and Tanzania over the next year.

GhanaWeb Reporter is Ghana’s first digital media sharing platform created to democratize journalism and empower content creators. Developed to give Ghanaian audiences direct access to a wide range of local content produced by citizen journalists and content creators, the GhanaWeb Reporter empowers niche journalists and content creators to avoid the cost of owning websites, search engine optimization and web hosting as they are granted access to monetized niche blogs that earn them a share of advertising revenue and Self-Service Advertising created to promote local advertising.

Integrated into the GhanaWeb App, the award-winning platform which runs on both iOS and Android operating systems allows users to share videos, audio, files, images and text of news, entertainment and opinion content as well as their social media posts to the App at their convenience. The posts are screened and published on the user’s page and on the GhanaWeb Wall for a wider reach.

GhanaWeb Reporter was the only project from Ghana among 21 projects from 13 countries in the Middle East, Turkey and Africa region to receive $1.93 million in funding from Google in 2020 as part of the first Google News Initiative (GNI) Innovation Challenge to help journalism thrive in the digital age and to see news innovators step forward with new thinking.