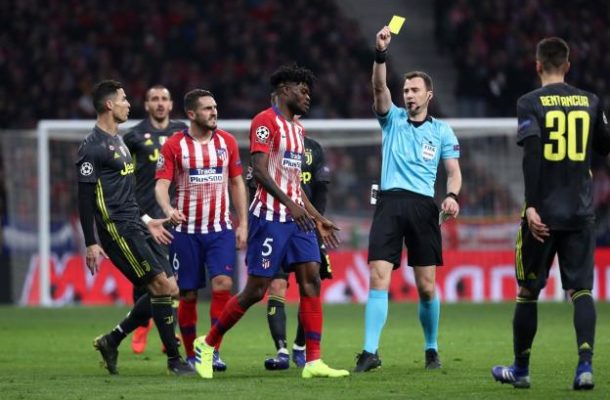 Atlético Madrid ace Thomas Partey will miss the second leg of his side's Champions League last-16 tie against Juventus after picking up his third booking of the tournament.

The Ghanaian international picked up a yellow card in Wednesday’s first leg at Wanda Metropolitano and will be suspended for the return clash in Turin on March 12.

The 25 year old was booked for a foul on Paulo Dybala in first half stoppage time.

Partey is not the only player the Rojiblancos will be without though, Diego Costa will also be forced to watch on the sidelines after he was booked for not keeping the correct distance before a Cristiano Ronaldo set-piece.

On the other hand, Juventus will have to welcome Atleti with Alex Sandro in the stands after being cautioned for an incident with Gimenez.

Partey’s suspension is a major blow for the La Liga giants, as the Black Stars midfielder has been an ever-present for them this season.

But Diego Simeone’s men will take a healthy 2-0 advantage to Turin courtesy of goals from defenders Jose Gimenez and Diego Godin.