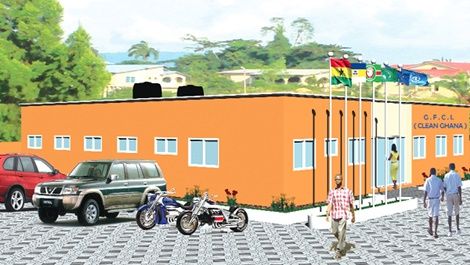 Ghana First Company Limited, a waste management company, has signed a memorandum of understanding with Thermodul System GmBH, a German company, to construct 20,000 units of modern toilet facilities across the country at a cost of $300,000,000.

The first 10,000 facilities will hopefully be completed and put into operation by the end of 2025. The rest will be completed soon after that.

The toilet facilities will be sited at lorry stations, marketplaces, recreational centres, beaches and along highways.

The facilities are in three categories: a 20-seater modern toilet facility which comes with a 20-seater W/C, 20 bathrooms, 20 urinals, one dressing room, one laundry room and two extra rooms to be used as stores.

In addition, the toilets will be provided with an image sensor flushing system, an automated vending machine for access control, a reception fitted with television sets and sofa seats and closed circuit television (CCTV) cameras.

The facilities will have two positive drilled boreholes each as a source of water supply for hand washing for improved hygiene. It will be operated solely on solar energy as a source of electricity, with the national grid as a backup.

Mosquito-repellent bulbs will be used at each facility to prevent malaria infections. The operation of the facility will be a 24-hour service with 15 personnel manning each facility, five attendants for every eight-hour shift.

Agreement
The agreement for the construction of the facilities was signed on Tuesday, April 24, 2018 between the Chief Executive Officer (CEO) of Ghana First Company Limited, Mr Frank Akuley, and the Managing Director of Thermodul System GmBH in Accra, Ms Lidia Mathe.

As part of the agreement, the German company will release the money for the construction of the facilities in tranches. The investor also has the mandate to give technical support and expertise for the construction of the facilities while the two organisations will collaborate to remedy any defects within the defects liability period of six months.

Collaboration
Mr Akuley explained that the Ministry of Sanitation and Water Resources had subjected the facility to technical and financial reviews and its viability and sustainability were not in doubt.

He said the company had entered into a public-private partnership (PPP) with metropolitan, municipal and district assembles (MMDAs) to construct these facilities nationwide.

He indicated that the company had already started constructing 38 of such projects, with some of them in far advanced states and near completion in certain districts in the Central, Brong Ahafo, Western, Greater Accra and Eastern regions, while over 90 contractors have also been awarded contracts.

Ms Mathe, after signing the agreement, paid a courtesy call on the Deputy Minister of Water Resources and Sanitation, Mr Patrick Boamah, and inspected some of the ongoing projects in the Eastern and Central regions.