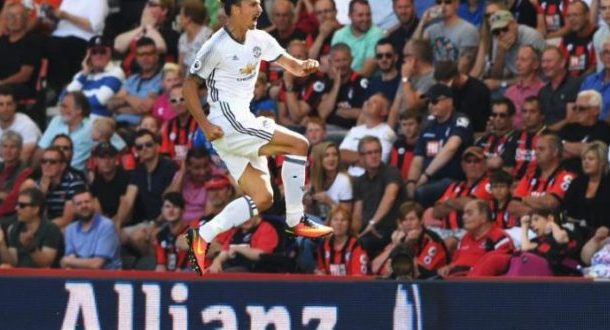 Manchester United claimed their first Premier League win under Jose Mourinho as they beat Bournemouth 3-1 at the Vitality Stadium. At times the game was stale and slow but moments of calamity and class were decisive in the end as the Red Devils picked up three points on the south coast.

Juan Mata, Wayne Rooney and Zlatan Ibrahimovic grabbed the visitors’ goals, while Adam Smith got the Cherries a consolation strike. And Mourinho will once again be pleased with how new signings Eric Bailly and Ibrahimovic looked as they are introduced to the English game. Manchester United, clad all in white, were dominant from the off, holding onto possession but Bournemouth had their wits about them, pressing quickly. An error from the returning Luke Shaw, making his first Premier League start for 11 months, allowed Callum Wilson an early shot his effort, though, was closed down by Daley Blind, but soon enough the Red Devils were back on top.

Mata, a surprise starter ahead of summer signing Henrikh Mkhitaryan and Jesse Lingard, looked to get the ball through to Ibrahimovic, a huge presence up against Simon Francis and Steve Cook, but saw an early attempt easily cut out. Ibrahimovic was again the target when Antonio Valencia burst down the right flank, but he was just denied at the far post by a brave Francis header.

The hosts slowly gained momentum in the match but while moments from Joshua King and Jordon Ibe showed promise, they were well marshalled by Mourinho’s men. With the Red Devils using their width, Ander Herrera and Marouane Fellaini were on the periphery of the game, but Rooney soon chalked up a shot on target, albeit a tame effort straight into Artur Boruc’s arms.

A wayward Harry Arter effort from long range was all the Cherries could muster in response as they struggled to win the ball from their opponents in a game played at a slow pace. Five minutes before the break though, Manchester United were ahead in fortuitous circumstances as Mata jumped on the end of a poor back pass from Francis. Boruc did well to save the shot but could only parry it into Francis’ legs, leaving Mata to stroke the ball into an empty net.

Bailly was solid on his Premier League debut and a strong follow through on King showed he’s ready for the rigours of English football, along with Ibrahimovic, if his team-mates can give him the right service. One of those men, Rooney, was well denied by Boruc and moments later tumbled in the area, although not convincingly enough for Andre Marriner to give a penalty. And just before the hour-mark the Englishman, just six yards out, made the most of a miskicked volley from Anthony Martial and nodded the ball beyond Boruc to make it 2-0 to the visitors. Ibrahimovic almost immediately tested the Polish goalkeeper from a free-kick but he showed a strong right wrist, palming it away from danger, but Boruc could do nothing with 63 minutes gone as the Swede rolled the ball into the bottom corner of the net from 28 yards.

Bournemouth, with 20 mintues to go, did at least get a goal back, although it was from an unlikely source in Smith. The ex-Tottenham right-back cut inside onto his left foot and leathering it into the top right corner beyond David De Gea, making the scoreline 3-1. Bournemouth looked to capitalise on their goal as the momentum swung in their favour, but even with the bustling Lewis Grabban, on as a substitute, they could get themselves another goal, allowing Mourinho to claim his first league win at the club without too much stress.