Brazil continues dominance over its 'clone' Ghana with latest thumping 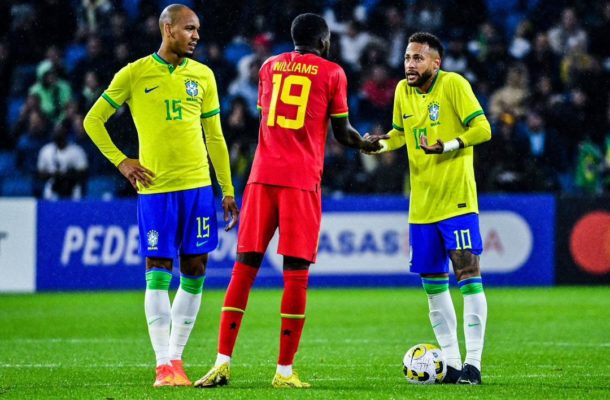 It was a familiar case of Deja Vu for the Black  Stars as they once again tamely surrendered to almighty Brazil on  Friday night under the bright lights in Le Havre.

The only stage in which  Ghana can and has been able to match Brazil has been at the under-age level where it appears all African teams often do very well.

Aside from that, it has been ominous defeats after defeats in five matches so far with one meeting at the World Cup and four friendly matches.

The first time Ghana played Brazil was on the 27th of March 1996 in Sao Jose Do Rio Preto when the Selecao hammered Ghana 8-2 in a pre-Olympics games-friendly game.

Tony Yeboah and Emmanuel  Duah  scored but it was not enough to lessen the ignominy of the thrashing.

Ghana then faced Brazil at the 2006 FIFA World Cup round of 16 clash after qualifying from a group that had the USA, Czech  Republic and Italy.

The  Black Stars lost as Ronaldo El phenomenon broke Gerd Muller's 14 goals at the World  Cup after rounding Richard Kingson and slotting home from a pass from Kaka as the Ghana defense protested for offside.

Luis Adriano added the second goal after tapping home a cross from Cafu before Ze Roberto added the third goal as Brazil qualified for the quarter-finals to face France.

The third time Brazil and its clone in Africa squared off was in an International friendly game in Fulham - London on 5th September 2011.

Adama Larsen Kwarasey made his Ghana debut that day in Fulham at the Craven Cottage where he pulled off lots of saves but Leandro Damaio headed home the winner on the cusp of halftime as  Brazil defeated Ghana 1-0.

Jordan Ayew is the only player who played that day who still featured in Friday's game which  Ghana lost 3-0 in Le Havre.

Then came Friday's humbling which in all fairness could have been more as a brace from Richarlison and a bullet header from Marquinhos completed the defeat.

When cometh the day when Ghana can stand toe to toe with Brazil and win a match against them, it appears that may not happen any time soon.