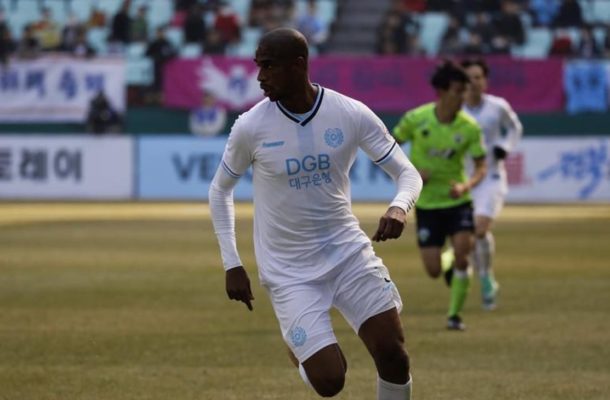 Melbourne: Daegu FC’s Brazilian strike force of Edgar Silva and Cesinha believe the AFC Champions League newcomers have what it takes to challenge the Continent’s elite ahead of their opening Group F game against Melbourne Victory on Tuesday.


Edgar Silva joined the Korea Republic side in mid-2018 after scoring four goals in Buriram United’s run to the last 16, while his fellow forward Cesinha initially moved on loan in 2016 and has been at the club ever since.

In December last year, the pair scored home and away against Ulsan Hyundai as Daegu’s 5-1 aggregate victory saw them lift the Korean FA Cup. It was the club's first major honour in their 17-year history and meant they qualified for the AFC Champions League for the first time.

“My experience in big competitions from different countries helps a lot, and I played against many strong teams in the AFC Champions League with Buriram last season,” said Edgar Silva, who scored against former winners Guangzhou Evergrande and Jeonbuk Hyundai Motors in the 2018 tournament.

“The most important thing this year is Daegu’s success in the AFC Champions League. It will be a big challenge for us and I really hope I can contribute to this.

“I will do my best to put in good performances in both this competition and the league this season.”

? Edgar went video game special for this solo effort! Is it a worthy Best Goal of #ACL2018??Vote for it and the other nominees here ?? https://t.co/oQSjbMgLMqpic.twitter.com/spjlR5ax7C— AFC Champions League (@TheAFCCL) November 25, 2018

Daegu began their 2019 K League 1 campaign with a 1-1 draw against defending champions Jeonbuk on Friday, with Edgar Silva notching his first goal of the campaign.

Like so often last year, the Brazilian was assisted by his countryman Cesinha, who was among the top creators of goals in the league in 2018 and is now set to make his first appearance in the AFC Champions League.

After leaving his homeland, the 29-year-old helped Daegu win promotion from K League 2 in his first year in Korea Republic and has since gone on to enjoy two fruitful years in the top flight.

A post shared by Dias De Lutas, Dias De Glórias (@cesinha_f) on Jan 18, 2019 at 5:23pm PST “It’s not only about my partnership with Edgar Silva, the whole team became closer and improved a lot in the second half of last year and in the end won the FA Cup,” noted Cesinha.

“I’m feeling really confident because this team won the FA Cup, the atmosphere during pre-season has been good and we are enjoying training.

“We want to start the season well, improve [from last year] in the league and also deliver a solid performance in the AFC Champions League.”