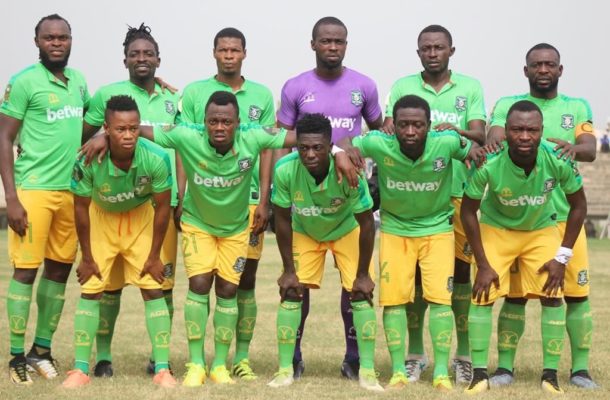 Aduana Stars came from behind thrice to play out a 3-3 draw with Moroccan side Raja Casablanca at the Nana Agyemang Badu Park in the second fixture of Group A.

The defending Ghana Premier League champions came into the match hoping to pick up their first points in the continent's second-tier club competition following their 1-0 defeat against Ivorian giants ASEC Mimosas in Abidjan.

After a frantic first ten minutes with both sides having to make last ditch goal line clearances to keep the scores at 0-0.

The Moroccans caught Aduana’s defense sleeping in the 11th minute through winger Benhalib Mahmoud who broke the deadlock.

The Ogya boys almost got the equalizer few minutes later after some brilliant one touch football to cut through the visitor’s backline but goalkeeper Znit Anas denied them from point blank range.

But Raja go their noses in front again in the 36th minute, an unmarked Mabidi Lemma gave the visitors a 1-2 lead at the break.

Full-back Caleb Amankwah put the Ghanaians back on level terms with a header from a corner kick at the start of the second half.

Their joy was cut short on the hour mark as Benhalib Mahmoud restored the visitors lead with his second goal of the game to give them a 3-2 lead.

In a dramatic late twist, substitute Nathaniel  Asamoah scored a vital goal in the 94th minute to ensure both teams shared the spoils in Dormaa.

Meanwhile in the other match of group A, AS Vita Club defeated Asec Mimosas by 3-1.