CAF CC: All even in Group C as Kotoko serve Zesco United a slice of humble pie 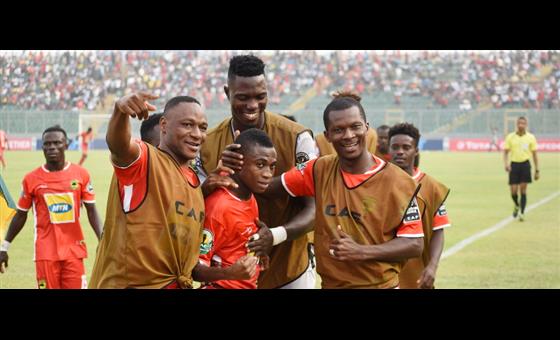 Asante Kotoko recorded their first win of the group stage after beating Zesco United 2-1 in Kumasi on Wednesday.

Kotoko started on the front foot with series of well-organized attacks into the penalty box of the Zambian visitors, but poor finishing and the agility of the Zesco defense was their bane.

The Porcupine Warriors nearly grabbed the opener on two separate occasions. First in the sixth minute through Emmanuel Gyamfi who after ghosting past his marker, shot agonizingly wide with only the goalkeeper Jacob Banda to beat.

Midfielder Kwame Bonsu who was a force at the centre of affairs for the hosts wasted a glorious opportunity to give his side the lead in the eight minute as his shot on target missed the goal by inches.

With Kotoko asking all the questions in terms of ball possession as well as creating chances, it came as little surprise when they had the first goal of the game in the ninth minute through Bonsu, whose shot deflected off a Zesco defence, before entering the post.

Incensed by the goal, Kotoko threw more men forward in search of more and nearly doubled their lead two minutes later through Yacouba Songe, but his shot was deflected for a corner kick which was eventually cleared by the Zesco defense.

However, it was Zesco who had a chance to equalize as they were awarded a penalty in the 20th minute after Agyemang Badu fouled a Zesco player in the Kotoko penalty box. But Kotoko goalkeeper Felix Annan became the hero as he expertly saved the penalty.

One goal soon became two as Kotoko found the back of the net once again in the 25th minute. Striker Sogne rounded up John Chingandu at the left wing and sent a cutback pass to on rushing Gyamfi who coolly planted the ball at the back of the net for the second goal.

Back from recess and the visitors upped their game and pinned Kotoko into their own half for most of the half in search of a goal.

It became a ding-gong affair and Zesco eventually had their goal against the run of play in the 73rf minute through Osumanu Rahim.

Just when the visitors were harbouring the thought of clawing back the equalizer, they had a man sent off in the 90th minute as Kondwani Mtonga was given a straight red card for a foul on a Kotoko player as Kotoko held on to victory.

Following Nkana’s 2-1 win over Hilal in the earlier kick-off in Kitwe, all teams in Group C are tied on three points after two round of matches.