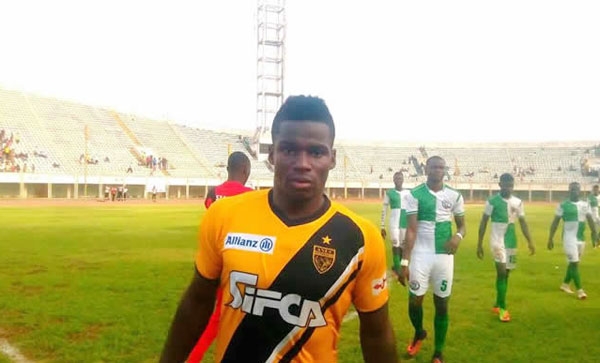 Former Asante Kotoko striker Ahmed Toure has voiced a word of caution to the Ghanaian side in their CAF Confederation Cup, urging them to score with a huge margin against San Pedro in the playoffs.

The porcupine warriors are will clash with the Ivorian side in the playoff of the CAF Confederation Cup with the first leg slated to be played in Kumasi.

Toure who last played for Kotoko in 2014 to 2016  believes things will be softer for the Kumasi based side if they are able to beat San Pedro with a convincing scoreline at home.

“For me I pray that Kotoko they should score 2, 3, 4 goals in Kumasi and when they come to Ivory Coast they come and play the normal football”, the Burkinabe international with Ivorian descent said  in an interview on Focal Sport.

According to Toure, San Pedro have a very good scoring record at their home grounds and it will only be safer for Kotoko to beat them in the first leg with more goals to prevent San Pedro from overturning the score line in the second leg.
“If you score one or two definitely when you come to their home grounds they score 2, 3 or 4 goals. For me I want Kotoko to qualify for the group stage”, he wished.
Asked why he wants Kotoko to qualify ahead of his own Ivorian side, Toure insisted that he is half Ivorian but he definitely wants his former club to make it to the group stages of the Confederation Cup.
“Kotoko if they play group stage matches I will be happy. It’s not because I’m Ivorian or half Ivorian half Burkina I should go for San Pedro, no, me definitely I want Kotoko to qualify, to be honest with you, definitely I want Kotoko to qualify”, he maintained.
Ahmed Toure played for Asante for the seasons of 2007-2008, 2011-2012 and lastly in 2014-2016.