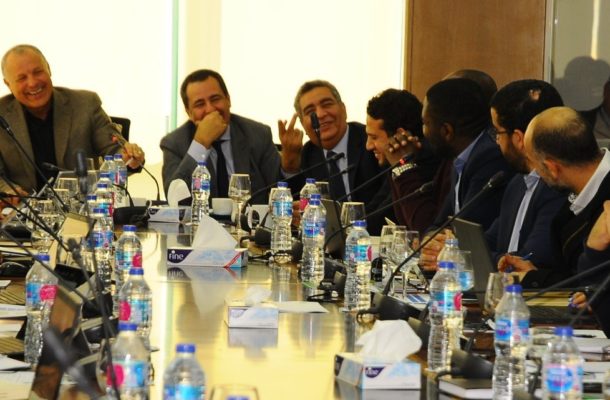 The first meeting between CAF and the Local Organising Committee (LOC) for the Total 2019 Africa Cup of Nations in Egypt was held in Cairo on Thursday, 7th March 2019.

With just three months to the start of the competition, CAF brought together all its major partners including Lagardère Sports, the exclusive agency commercializing CAF marketing and media rights, to its headquarters in Cairo to accelerate the intense preparations for Africa’s flagship football competition.

The meeting, co-chaired by LOC boss Hany Abo Rida and Mouad Hajji, the CAF General Coordinator who is also the General Manager of the tournament, focused mainly on the draw of the 24-team tournament which will be held on 12 April next to the iconic Great Sphinx of Giza.

The participants deliberated on the organisational and logistical aspects for the ceremony to be broadcasted to a global audience of more than one billion.

Idris Akki, Managing Director for Africa of Lagardère Sports, also explained the organisational and logistical aspects of the second inspection visit which starts on 10 March.

The competition will be held from 21 June to 19 July with 24 teams participating in the tournament for the first time.