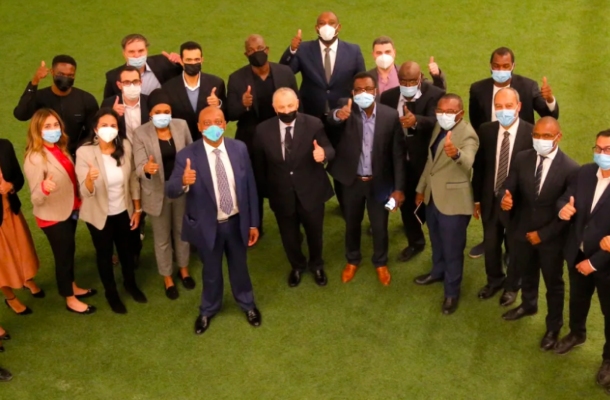 Dr Patrice Motsepe, arrived at the headquarters of the continental football governing body in Cairo on Thursday, for the first time since taking charge of CAF.

Accompanied by the General Secretary of CAF Veron Mosengo-Omba and Egypt Football officials, President Motsepe commenced his duties with a meeting with the Egyptian Minister for Youth and Sports, Mr Ashraf Sobhi.

President Motsepe stated his desire to make the organisation ‘globally competitive’ when he had a meeting with heads of departments of the CAF administration at the headquarters in Cairo.

“I had initially wanted to meet the staff again in Cairo just after the elections but this was not possible because of Covid-19,” said President Motsepe.

This was the CAF President's second meeting in person with senior staff members: the first one was on the night of his election in Rabat, Morocco.

“What is important is, we must all share the goal of making African football globally competitive. With Veron, we have the person with the right expertise to lead administration with the highest standards and I know that we will leave a legacy in this continent.”

Earlier this week on Tuesday, Dr Motsepe, together with Mosengo-Omba attended the 45th Ordinary UEFA Congress in Montreux, Switzerland.

During this visit in Switzerland, President Motsepe discussed areas of cooperation and collaboration between CAF and UEFA President, Aleksander Ceferin.