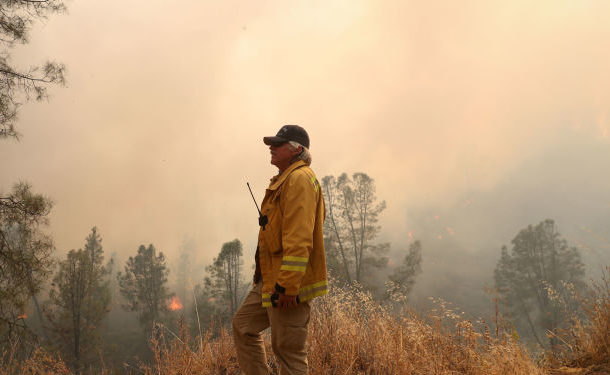 MOSCOW (Sputnik) - The Valley Fire in San Diego County in the US state of California has spread over 3,000 acres, destroying multiple structures and threatening local communities, according to the California Department of Forestry and Fire Protection.

"ValleyFire [update] The fire is now 4,000 acres and is 5% contained, 10 structures have been destroyed. CALFIRESANDIEGO remains in Unified Command with ClevelandNF [National Forest]", Cal Fire said on Twitter on Sunday.

According to the department, firefighters are "working against extreme temperatures, low humidity, and gusty winds".

On Saturday, the California Department of Forestry and Fire Protection announced that the Valley Fire had spread over 1,500 acres.

“There’s fire on all sides, all around us.” Absolutely terrifying video from Mammoth Pools where 200+ people were trapped when the Creek Fire exploded pic.twitter.com/xDb8huwWKe
— Brian Kahn (@blkahn) September 6, 2020

The Cleveland National Forest said on Twitter on Saturday that the fire was threatening the community of Carveacre and evacuation orders had been issued. Multiple air and ground resources were on the scene.

San Diego Gas and Electric said on Twitter on Saturday that over 12,000 of its customers were without power because of the Valley Fire, but later issued a correction saying only 1,000 customers were affected.
According to a Sunday update from the California Department of Forestry and Fire Protection, nearly 14,800 firefighters continue to battle 23 major fires and lightning complexes in California. Over 10,500 people remain evacuated.
Since 15 August, California has seen over 900 wildfires, which have now burned over 1.6 million acres, according to the California Department of Forestry and Fire Protection. At least 8 people have died because of the fires and nearly 3,300 structures have been destroyed.

On 22 August, US President Donald Trump approved a major disaster declaration for California.