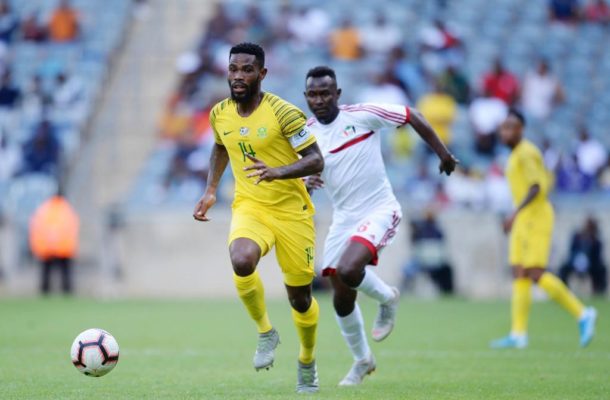 South Africa edged out a stubborn Sudan side 1-0 in the 2021 Africa Cup of Nations (Afcon) qualification Group C match on Sunday afternoon.

Bafana Bafana were targeting nothing but a victory having started their qualifying campaign with a disappointing 2-0 defeat to Ghana away on Thursday.

Molefi Ntseki made six changes to the team which faced the Black Stars with Thulani Serero amongst the players, who were making their return to the starting line-up.

After countless of attacks, Bafana finally broke the deadlock in emphatic fashion.

Serero's lowly cross was poorly cleared by the Sudan back-four and Phiri pounced on the opportunity that left Abu Eshrein with no chance to save.

Sudan certainly started the second half with better energy as they pressured South Africa in hopes of landing an equaliser.

South Africa held onto their lead and collected three points that will see them level on points with Sudan and Ghana in Group C.

The Black Stars are expected to top group after match-day two as they take on the lowly-ranked São Tomé on Monday.

The AFCON 2021 qualifiers will then take a nine-month break.

When the competition resumes in 2020, South Africa will play back-to-back (home and away) matches against São Tomé in September.

The next month, South Africa will welcome Ghana for an epic home clash before Molefi Ntseki's charges travel to Sudan for their final Group C match in November.