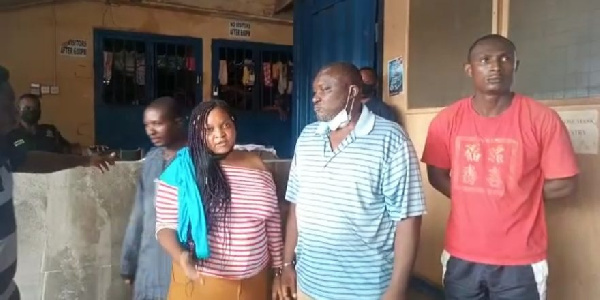 A suspected Cameroonian Child Traffiicking syndicate have been arrested in Kokrobite in the Bortianor Ngleshie Amanfro constituency.


The Kidnappers, a male and a female aged between 40 to 45 years were arrested after their activities became suspicious.

Nine children aged between 3 to 12 years were also seen in their possession.

According to Atinka News sources, the child traffickers were arrested Friday evening at around 10 p.m. after a Police dispatch rider suspected their activities.

The traffickers were seen in a Opel Astra taxi cab with registration number BA 1298 X heading to kokrobite with nine children at the back seat of the car.

Their activities drew the attention of the dispatch rider who signalled them to stop upon which they were arrested after interrogations.

Meanwhile the Adontenhene of Kokrobite, Nii Kwashie Djabum who expressed worry about the incident urged parents to keep an eye on their children to prevent occurance of such nature.

Director of Anti -Human Trafficking Unit at the Police Headquarters, Chief Superintendent Michael Baah who did speak on camera said four suspects have been arrested in connection with the trafficking whiles investigations continue.