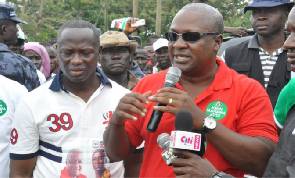 President John Dramani Mahama is baffled at the continuous claim by the opposition New Patriotic Party (NPP) that he has done nothing in his four-year tenure.

If the is not mischief, the President said he cannot fathom why in spite of the unprecedented infrastructural development across the country, opposition parties are refusing to see and appreciate it.

President Mahama expressed these sentiments while addressing the chiefs and people of Cape Coast as part of his tour of the Central region Wednesday.
 
The President was left with no other option than to use the popular phrase of comedian Lil Win ‘I can’t think far; I can’t think madness’ to soothe his pain.