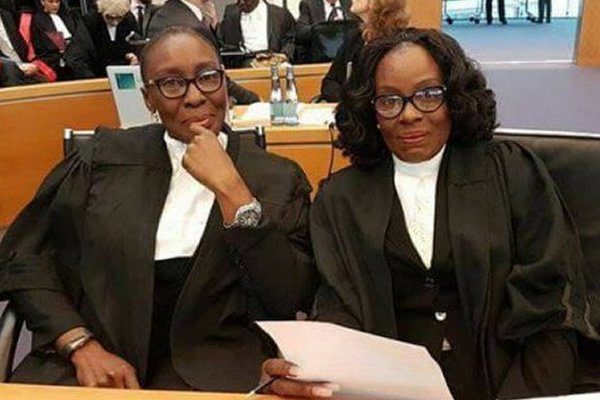 Mr. Speaker, without equivocation, the feat achieved by these illustrious Ghanaians lift high the flag and image of Ghana. They help preserve the great tradition Ghana has become associated with as a nation whose human capital can be relied upon by the international community in carrying out onerous assignments with distinction. This testimony remains fresh in our memories following the outpouring of profound tributes from all over the world to attest to this fact when former UN Secretary General, Busumuru Kofi Annan was called to glory last year.

Mr. Speaker, the year 2018 has been touted as the year of the woman – from the remarkable courage and gains of the Me Too Movement, the refreshingly progressive gender balanced cabinets which are on the rise with Ethiopia and Rwanda showing the way in Africa, to the historic results of the 2018 US Mid Term elections; I shall therefore in this spirit and hoping that 2019 would follow this trajectory, begin by celebrating our great women achievers:

Mr. Speaker, as has been widely reported; on December 10, 2018, UN Secretary General, Antonio Guterres swore in Ghana’s former Minister responsible for Foreign Affairs and Regional Integration, Hon. Hannah Serwaah Tetteh as the UN Secretary General’s Special Representative to the African Union (AU) and Head of the United Nations Office to the African Union (UNOAU).
This elevation came after her earlier appointment as the Director-General of the UN Office in Nairobi, Kenya on July 13th, 2018.

Mr. Speaker, Ghana’s learned former Attorney-General who served under the Mahama Administration from 2013 - 2017, Hon. Marietta Brew Appiah-Oppong has also been appointed a member of the International Court of Arbitration. Her appointment took effect from July 1st, 2018.  She has since been discharging her duties for the prestigious global arbitral institution with offices in Paris, Hong Kong, New York, Sao Paolo and Singapore.

Mr. Speaker, on June 12 2018, Madam Gertrude Oforiwa Fefoame, who is visually impaired, was elected to the committee that oversees the UN’s Convention on the Rights of Persons with Disabilities. The committee of 18 members went from having one woman to six in the June elections where Madam Fefoame was elected with Rosemary Kayess of Australia; Miyoon Kim of South Korea; Risnawati Utami of Indonesia; Mara Gabrilli of Brazil; and Amalia Gamio of Mexico. She is a board member of the Ghana Federation of Disability Organisations, and Sightsavers’ Global Advocacy Adviser for Social Inclusion and has worked closely with the UN to champion the rights of persons with disabilities.

Mr. Speaker, another distinguished daughter of the land, Madam Anita Kokui Gbeho, has been appointed as Deputy Joint Special Representative for the African Union-United Nations Hybrid Operation in Darfur (UNAMID) to replace Bintou Keita of Guinea. Since 2015, she has served as Resident Coordinator/Resident Representative, United Nations Development Programme, Namibia, where she supported the Government of Namibia to coordinate its external development assistance through the United Nations Partnership and Namibian Development Frameworks.

Mr. Speaker, kindly permit me to now focus attention on their male counterparts. The Economic Community of West African States [ECOWAS] Council of Ministers has appointed Dr. Kofi Konadu Apraku as ECOWAS Commissioner for Macroeconomic Policy and Economic Research following his nomination by President Nana Addo Dankwa Akufo-Addo. He is expected to serve in that capacity for the next four years.

Prof. Robert Dussey, Chairman of the ECOWAS Council of Ministers in a statement specified that Dr. Apraku’s responsibilities shall include “Multilateral surveillance mechanism which involves regular assessment through joint surveillance mission of the economies of ECOWAS Member States to ascertain whether the convergence criteria are being met”.

Dr. Apraku is a former Minister of Regional Co-operation and NEPAD, and also Minister of Trade and Industry. He also served as a Member of Parliament for Offinso North Constituency for three consecutive terms (1997 - 2009)

It is also worth noting that Dr. Alfred Mahamadu Braimah, another Ghanaian was appointed Auditor-General of ECOWAS Institutions. Dr. Braimah before this appointment was the ECOWAS Director of Finance.

Mr. Speaker, another distinguished Ghanaian, Mr Kwabena Osei-Danquah who before his appointment had served in various capacities as a diplomat for Ghana and a senior official of the United Nations over a course of 33 years, has been appointed as the Chef de Cabinet to the President of the 73rd session of the United Nations General Assembly.

He was the Director of the Division for Governance and Multilateral Affairs (DGACM) of the United Nations Population Fund (UNFPA) from the beginning of April 2015 until this appointment. He joined UNFPA in 2002, after working as a diplomat for Ghana for over 17 years within which he had the honour to serve for four years at Ghana’s Embassy in Prague to the then Czechoslovakia and subsequently to the Czech Republic, accredited to the Slovak Republic, Hungary and Poland.

He previously served as Vice-President of the Bureau of the International Conference on Financing for Development and the Executive Board of the United Nations Development Programme (UNDP) and UNFPA and in many other capacities as a diplomat.

Mr. Speaker, in the same vein, in 2017, some other notable citizens of our dear country made Ghana proud by receiving appointments to various international offices. It is worth mentioning that on October 13 2017, United Nations Secretary-General António Guterres announced the appointment of Major General Francis Vib-Sanziri as the Head of Mission and Force Commander of the United Nations Disengagement Observer Force (UNDOF). Major General Vib-Sanziri succeeded Major General Jai Shanker Menon of India, who completed his assignment on 30 September 2017.

Similarly, on July 24, 2017, a former Deputy Foreign Minister of Ghana under the erstwhile Mahama Government, Emmanuel Bombande was appointed by the United Nations as its Senior Mediation Advisor in the Central African Republic (CAR). He assumed duties on August 1, 2017. Mr Bombande, a peace-building and conflict resolution expert, previously had been the Special Assistant/Adviser to the UN Secretary General’s Special Representative to West Africa and was Head of the UN Office for West Africa that has the mandate, inter alia, to enhance the contributions of the UN towards the achievement of peace and security in West Africa. He is a co-founder of the West Africa Network for Peace-Building (WANEP); an organization specialized in conflict resolution, mediation and peace-building in the West African sub-region.

Mr. Speaker, to complete this Hall of Fame for today is Ambassador Thomas Kwasi Quartey who on January 30, 2017, was elected as the Deputy Chairman of the African Union (AU) at the opening of the 28th Ordinary session of the African Union (AU) in the Ethiopian capital, Addis Ababa. He joined the foreign service of Ghana in 1977 and rose through the ranks to become the ambassador to Cuba, Belgium, UN, AU and Ethiopia. He held several diplomatic appointments including Director of Passports from 2004 to 2006, and Deputy High Commissioner to the U.K. Ambassador Quartey before his current appointment served as the Secretary for former President John Mahama.

Mr. Speaker, as Benjamin Disraeli puts it rather succinctly; “the legacy of heroes is the memory of a great name and the inheritance of a great example.” These women and men of our nation will definitely be in our memories and that of many generations for their outstanding accomplishments and the impact their various callings will have on the image of our country.

Mr. Speaker, May I commend all successive Governments for entrenching the practice of providing “No Objection” while often committing envoys and staff of the Foreign Service to campaign vigorously for Ghanaians who come up for consideration to international positions irrespective of their perceived political affiliation. This beautiful convention which puts Ghana First must be lauded by this House and indeed all our Presidents deserve high praise for deepening this positive tradition.

As I call on the youth of our country to be inspired and emulate the worthy example of these Ghanaians, may I strongly appeal to them to seriously embrace multilingualism? Our ability to attain proficiency in more than one international language added to the values of integrity, hard work and self-confidence shall always put us in good stead.

We salute these gallant Ghanaians and the many more making our country proud out there. We pray for their continuous success.

I thank you, Mr. Speaker.