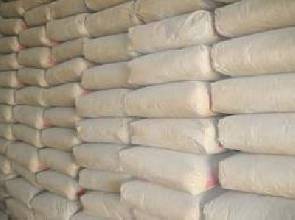 The price of cement has dropped slightly on the market in what appears to be a price war among competing brands.

Dangote Cement Ghana Limited was the first to drop its price in September, following which GHACEM Limited reduced its price by about the same margin.

The prices of 50-kilogramme (KG) bags of both GHACEM and Dangote cement have been reduced by GH¢1 at the various cement outlets in Accra.

There is also the theory that the drop in the prices of cement is being driven by the desire of the competing companies to win more market share.

The prices of the products vary from one area to another.

None of the shops at Nima, Mamobi and New Town sold Dangote cement, which the sellers explained was because of the lack of patronage of that product in those areas.

When the Daily Graphic visited the central business district of Accra yesterday it saw that some shops sold GHACEM cement at GH¢30 and Diamond at GH¢29.

According to the dealers, they did not sell Dangote cement in their stores because patronage of the product was very low.

They said they sent their supplies of Dangote cement outside Accra, where the product enjoyed good sales.

From Tema, Della Russel Ocloo reports that GHACEM may be experiencing serious competition from competing brands such as Dangote and Diamond cement which are selling at relatively low prices, compared to the price of GHACEM cement.

The ex-factory price for GHACEM cement is GH¢29.30.

Retailers in Tema sell GHACEM cement at GH¢30, while Dangote and Diamond cement are sold at GH¢26 and GH¢29, respectively.

With some level of stability in the prices, many market watchers are of the view that the low prices being offered by the two companies have prompted GHACEM, which hitherto increased its prices from time to time, to maintain the current price for a while now.

But an official source at GHACEM said the company had maintained the present price owing to the relative stability in the economy and the improvement in the power situation.

“Fluctuation in cedi/dollar rate, extreme power challenges and an increase beyond 10 per cent in petroleum prices are factors that we consider when we have to increase prices and these have been stable for some time now,” it said.

“It is when these indicators come out strongly that the company will be compelled to go to the market for higher prices,” the source said.

It suggested that GHACEM’s competitors were offering low prices based on five to 10-year business strategic plans to build their clientele.

GHACEM has, in recent times, been seen advertising its latest brand of products with the introduction of the Super Strong brand.

The source, however, denied that the brand was a new product introduced by the company as a fighter brand to counter a similar product from Dangote.

According to the source, GHACEM had the 42.5 and 32.5 brands and only rebranded them by repackaging them in bags.

Similarly, he said, dynamic market conditions informed GHACEM’s decision to introduce television and radio commercials, since the company was no longer operating a monopoly in the market.

“We only responded to the market demand by repackaging our products, and often when we take the lead, others follow,” it said.

“Gone are the days when we did not have to advertise. Times have changed and the competition is getting tough. So we need to revise our market rules by advertising to sell,” the source said.

The situation in the regions was not different from what prevailed in Accra at the time of filing this report.

From Tamale, Samuel Duodu reports that the prices of the various brands of cement vary from one area to another.

Diamond cement, which is produced at Buipe in the Central Gonja District in the Northern Region, is sold at between GH¢30 and GH¢31, while Dangote goes for GH¢33 and GHACEM between GH¢33 and GH¢35, depending on the location.

GHACEM and Dangote cements were in short supply at most of the hardware shops visited by the Daily Graphic, while majority had Diamond cement in stock.

Abdul Majeeb, a cement dealer in the central business district of Tamale, said there were no supplies of GHACEM and Dangote cement on the market but they had in stock Diamond cement.

Some of the residents interviewed said they preferred Diamond cement to the others, since it was cheaper and of the same quality as the other brands on the market.

From Takoradi, Akwasi Ampratwum-Mensah & Koblah Dotsey Aklorbortu report that cement dealers in the various parts of the Western Region have been seriously overwhelmed by the price war among the various brands.

The other brands, GHACEM and Dangote, go for ¢30.

Many of the sellers were of the view that builders mostly bought any available brand.

Mary Anane reports from Ho that Dangote and Diamond cement are the two common brands in Ho, although one can still buy GHACEM cement on the market.

The highest prices for Diamond and Dangote cement spotted on signposts in town by the Daily Graphic were GH¢28 and GH¢29, respectively.

Some retailers who had both Dangote and Diamond cement in their shops sold the two at the same price.

For instance, at Vappy Concrete Products in Ho, a bag of Dangote and Diamond cement is sold at GH¢27.5.

In Bolgatanga, checks at various sales points revealed that three different types of cement were available on the market at the time of filing this report.

They are GHACEM, Diamond and Super Rapid cement which is imported from China, reports Vincent Amenuveve.

Dealers in these cement brands indicated that GHACEM and Super Rapid cement both sold at GH¢33 per bag, while Diamond cement was the cheapest among them, selling at7 GHC32 per bag.

Meanwhile, Kwame Asare Boadu in Accra reports that Dangote Cement Ghana Limited said its entry onto the Ghanaian market had brought competition into the industry, resulting in reduction in cement prices.

The company, owned by Africa's richest man, Aliko Dangote, was established six years ago and has been bringing cement from its parent factory in Nigeria to Tema for distribution across the country.

The Media Relations Officer of the company, Mr Etornam Komla Buami, told the Daily Graphic yesterday that the 42.5R grade of ordinary Portland cement the company supplied onto the market, the highest quality of cement in West Africa, had been the major factor for driving the competition in the country.

"Even though we produce the highest quality of cement, our price is lower than the lower quality products on the market," he said.

The company is currently constructing a $100-million grinding plant in Takoradi that would have the capacity to produce 1.5 million tonnes of cement annually.

"This investment, which is expected to come on board soon, will further drive the competition to higher levels, which will be good for the country, as it will further push down prices," Mr Buami said.

The Diamond Cement Company Limited has also reduced the price of its cement.

An official of the company told the Daily Graphic that the reduction was to boost sale of the product during this season.