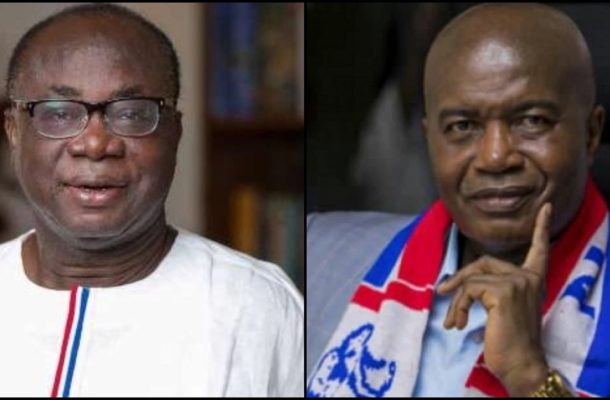 The Ashanti Regional Chairman of the New Patriotic Party, Mr. Bernard Antwi Boasiako, also known as Wontumi has called on delegates of his party to vote massively aspiring chairman of the NPP, Frddie Blay.

According to Chairman Wontumi, Mr Blay deserves an applause for honouring his promise to the party by buying 275 buses for the party.

To him, Mr Blay has demonstrated his commitment to the NPP party, and has already earned his vote at the up-coming delegate’s conference to be held June 7, 2018 in Koforidua.

Chairman Wontumi, (Photo credit: Myjoyonline.com)
Mr. Blay, who is seeking to be made the substantive National Chairman of the NPP, has rolled out plans to purchase about 275 buses as a means of supporting NPP constituency offices to raise revenue.

Though various stakeholders including Mr Blay’s closest competitor Stephen Ntim has accused him of engaging in vote buying, close to half of the buses have arrived in the country days to the delegate’s conference.

On this note, Chairman Wontumi who appears to be fan of Mr Blay explains that he must win as the National Chairman of the NPP.

“It can only take a courageous leader like Mr. Blay to introduce such business model to the party. He promised us and he has delivered. I personally promised to build the NPP a party office in the Ashanti region and I am fulfilling it. Such is the trait of every good leader and Blay is one person all delegates in the party can trust and vote for,” he told Accra-based Adom FM.

However, the Special Prosecutor, Martin Amidu hhas been petitioned to investigate the acting National Chairman of the NPP on how he funded the purchase of the buses.

Meanwhile, the spokesperson for Mr. Blay, Richard Nyamah, has explained that his boss facilitated the purchase of the buses by making a down payment of 3 million dollars, which constitutes 30% of the total cost of 11.4 million dollars for the 275 cars.

Mr Nyamah said the buses are not for free, and that they are to help the constituencies manage and generate revenue by using them for commercial purposes, and pay for them over a period of two-years.