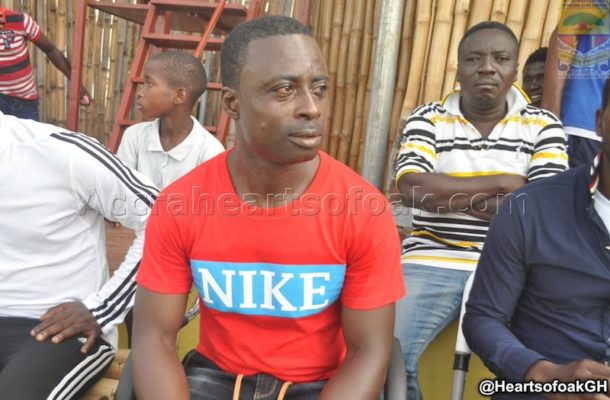 Former National Star Charles Taylor has denied insulting fans of Accra Hearts of oak, saying his vitriolic attacks was only directed to one person.

He has however apologised for his actions amid rising tensions between him and sections of the fans, who have threatened him not to step foot at the Accra stadium on Wednesday.

Taylor on Monday got his name into a hit list after a banter on phone with one of Hearts supporters, Sherrif(Shefphobia), who happens to be a police man.

He is been targeted for insulting the fans but the Phobian Legend denies that, saying his curses were directed at Sherrif.

He had earlier dared  the fans to attack him when they see him on Wednesday after lodging a report to Teshie Divisional police.

But according to PRO of the club's supporters front, the year 2000 champions league winner has asked the fans to forgive him and would go on air to apologise.

"Taylor called me this morning after the Happy FM banter, in fact he appealed to me to use my good offices to calm tempers," NCC Paa Kofi Sunsum said in a communique to the fans.

"He said he has no issues with team Hearts of Oak but 'Shefphobia' angered him and he lost head but he's sorry if he had hurt phobians, and that, he'll go on air with Amankwaa Mireku to apologise and settled the issue once and for all.

"He also promised to perform very well in the match and make Hearts supporters happy.Please let's forgive him and move on. Hearts is bigger than any player as well as any individual so let's just forgive him."

Charles Taylor and Sherrif went into scathing verbal exchanges after the latter called to question why the former player's claims that Hearts of oak prevented him from joining Italian giant Juventus in 2002.

Sheriff, a police officer and a member of Hearts of oak's Chapter 13, could not fathom why the players has constantly blame the team for his football woes.

Taylor played three seasons for Accra Hearts of Oak before he was demonised by the phobians due to  his controversial move to perennial rivals Asante Kotoko in 2003.

Charles Taylor is billed to play for Hearts of Oak in Wednesday’s game against his former club Asante Kotoko as some retired players of the the two soccer giants in the country  play a friendly match on Wednesday to mark the independence day celebration at the Accra sports stadium.