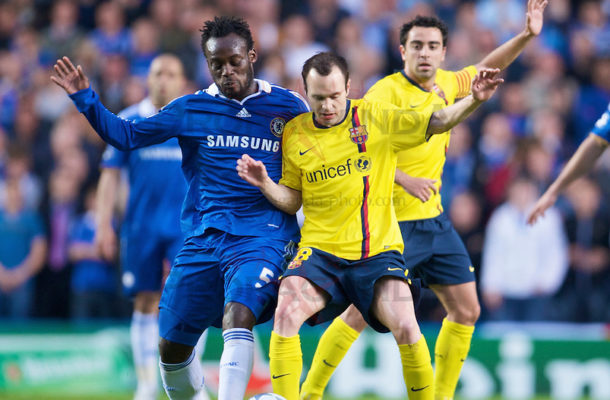 Former Black Stars midfielder Michael Essien has opened up on how he felt after Chelsea were knocked out of the Champions League by Barcelona in controversial circumstances nine years ago.

Norwegian referee Ovrebo was widely criticized after he turned down four penalty appeals by the home side during the contest at Stamford Bridge and subsequently became the focus of their fury after Andrés Iniesta's late equaliser saw the match end 1-1 and put Pep Guardiola's side into the final on away goals.

The former Blues was asked about his most memorable games and said: “I would have to say my first game, a 1-0 win at home against Arsenal in 2005.

“We won and Didier scored a bit of a lucky goal. I came on as a sub in the second half so it always sticks in my mind.

“The one against Barcelona in 2009, when I scored, also stands out but unfortunately we couldn’t progress to the final that night.

“Lastly I would say the game against Arsenal when I scored with a long shot in 2006. Those two goals were probably the best I’ve scored but if I had to choose between them I think it would be the Arsenal one because it’s always great to score against your rivals and it means a lot to the fans, it sticks in their minds.”