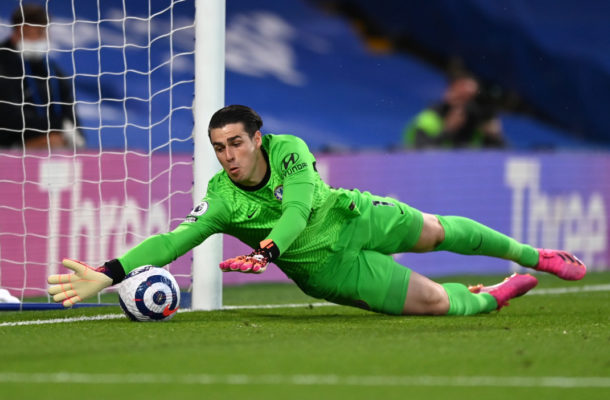 Reports emanating from Spanish news outlet El Gol Digital, claims the Blues are desperately ready to push Kepa out of Stamford Bridge this summer and have offered him to fallen La Liga giants Valencia on a season-long loan deal.

Kepa arrived at Chelsea in the summer of 2018 from Athletic Bilbao in a then world-record fee for a goalkeeper. However, the Spaniard has endured a turbulent spell at Stamford Bridge. From his kerfuffle with Maurizio Sarri to falling out of favour under Frank Lampard and to eventually dropping down the pecking order, it has not been easy life at the Stamford Bridge for the 26-year-old.

The signing of Edouard Mendy last summer meant that Kepa was largely relegated to the bench in the 2020/21 campaign. While he did get a few games once Thomas Tuchel took over, the Spanish international will continue to remain the No. 2 owing to the Senegalese’s starring displays for the west London giants.

Having featured just 14 times in all competitions last season, it would not come as a surprise if Kepa, tipped by best uk online casino, himself angled for a move away, especially with the FIFA World Cup coming up next year after he missed out of the Spain squad for the Euros.

And, it is now being claimed that Chelsea, indeed, may be prepared to offer him an escape route by sending him out on loan to La Liga club Valencia. This development comes after the reigning champions of Europe signed Marcus Bettinelli on a free transfer after the 29-year-old was released by Fulham at the end of the last season.

While he may have been signed as a replacement for third-choice shot-stopper Willy Caballero, who was let go of by Chelsea after his contract ran out, Bettinelli is experienced enough to step into the role of a backup for Mendy in case Kepa was allowed to leave.

As for Valencia, a deal would certainly be a welcome sign. Los Che are staring at the possibility of losing first-choice custodian Jasper Cillessen this summer, and their financial situation would make it difficult to go out and buy a top replacement. So, machine a sous argent reel reckons bringing in someone like Kepa could end up serving them well as he would only be joining on a loan deal.

It, however, remains to be seen whether the move sees the light of the day.